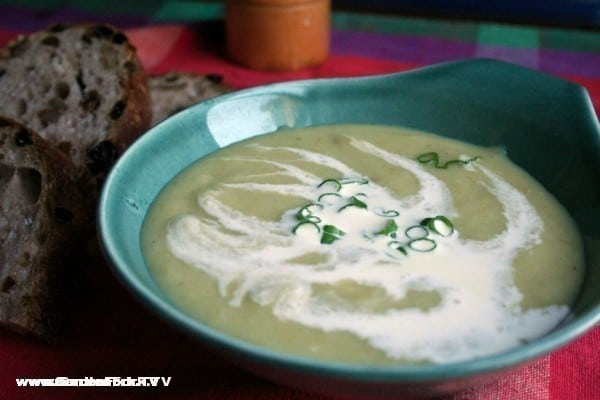 The growing season has come to an end here on the East Coast. One of my favorite harvest meals is potato and leek soup made with heavy cream — a very humble yet satisfying meal. This soup is perfect for fall's fickle weather. The soup base can be kept in the fridge for up to a week and then served as a hot hearty meal, or served as refreshing, chilled Vichyssoise (pronounced vee-shee-swaz). Despite its French trappings, Julia Child called Vichyssoise "an American creation," invented by Louis Diat, a French chef who worked at the Ritz-Carlton (c. 1917)

Leeks are mild-mannered cousin of the onion, they tend to be gritty since they grow in sandy soil. They require much washing before cooking. They have a very mild onion flavor and a subtle sweetness. Give it a shot, it's not that hard to make and you probably have everything in your kitchen, but you will need a blender.

WASH LEEKS
No one likes sand in their soup. Here are some instruction on cleaning and washing leeks. Discard the roots and any part of the leeks that are too fibrous and stringy, usually it's just the top outer portion of the "greens." With a sharp knife cut leeks into rings that are about ¼" to ½" thick and put them into a large bowl (or pot) of water with a ¼ cup of vinegar. Break up the rings with your hands and rub the leeks vigorously. Vinegar is the key, when the pH factor is adjusted dirt and grit are attracted to the water, as the leeks float to the top dirt settles at the bottom. It also gets rid of any unwanted garden visitors. Rinse under tap, drain in a colander and repeat until all grit it removed. If you have one, a salad spinner is real time saver. So... why don't you have one yet?

MAKE THE SOUP BASE
In a large stock pot melt butter, then add roughly chopped onion and salt. When the onions have clarified add the cleaned leeks, garlic, and olive oil. Cover and reduce heat to medium and sweat everything for about 20 minutes. Stir occasionally. Add stock and bring to a boil. Add peeled potatoes and sugar then reduce heat. Make sure the potatoes are cut into smaller pieces of even size. Return cover and simmer until potatoes are fork friendly (40 minutes or so) then set aside to cool. Next, dust off that blender — ladle soup into the blender and puree. There you have it, the soup base. You can store this away in the fridge for up to a week, but don't freeze it. For a vegetarian version use mushroom or vegetable bullion.

SERVE IT UP HOT
In a smaller pot heat up a cup of milk, add about three cups of the soup base and little cream (4 tbl). Salt and pepper to taste. Optional: Top soup with more heavy cream before serving. This goes well with a toasted crusty bread.

SERVE IT UP COLD
On one of those weird hot fall afternoons, serve up some Vichyssoise. Add cold milk and cream to the soup base and mix it well. The only thing that can make this better is light topping of crumbled bacon or fried onions.