Its been real cold this winter, 7 degrees F this morning, and I go to start the car and the engine barely turns over. On the second try, the engine doesn't turn over, you just hear the dead battery clicking. The battery is just about dead. So the question is, how do you charge a dead battery?

I didn't need to go anywhere immediately, so I opted for a battery charger; the kind you plug into the wall and attach two clips to the dead battery terminals. First I had to find our car battery charger in the garage. I was hoping I hadn't loaned it to someone and then forgotten about it. This happens sometimes. But I did find it. The cables were pretty stiff from the cold, but luckily I have ample outlets in the garage. I popped open the hood, removed the plastic boot covering the positive terminal, and connected the charging cables.

There are a couple of different kinds of battery chargers, some are built to maintain a charge in the battery, sometimes called trickle chargers. These are good for vehicles that aren't used regularly, as the battery can lose its charge slowly. Trickle chargers monitor the battery charge, and when it drops, it slowly charges it back up to full charge. These chargers can plug into a wall or use solar panel.

Fast chargers are meant to charge the battery quickly. How fast depends on the model purchased, and the state of the battery. The one I have charges a battery overnight, some will charge a dead battery in a matter of hours, but they cost more. 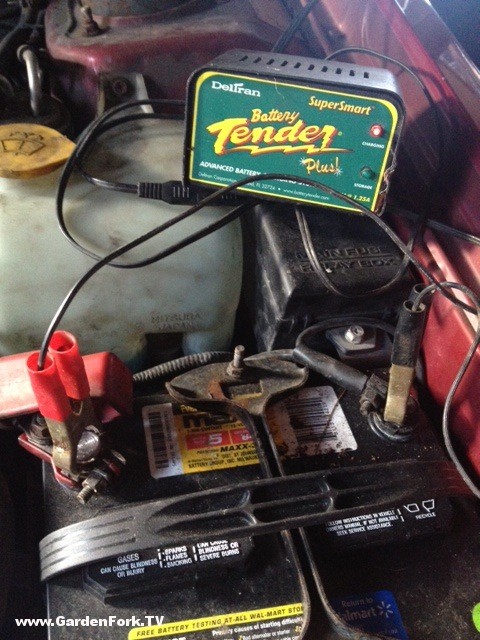 Follow the instructions that come with your battery charger

The other thing to think about is the age of the battery. Car batteries, as they get older, lose their ability to hold a charge. And if the battery has gone completely dead several times - called a deep discharge - the battery degrades quickly. Car batteries are built to provide a large amperage current to the starter for a short burst to start the car, they are not designed to be completely discharged.

Cold weather also degrades a battery's ability to work. Its a chemical reaction in the battery that is providing the power, and in cold weather, this reaction doesn't work as well. In some cold climates, I've seen car battery warmers that you plug in overnight to keep the battery warm enough to start the engine.

After an overnight charge, the car started up as normal, which is a good thing. If after a full charge, the battery still doesn't work, or barely turns over the engine, its time for a new battery. Best to take the dead battery with you to the auto parts store, that way you can match it exactly, and the store can recycle the  dead battery for you.

What to do you think? Tell us your car battery stories below: