When we check our honeybee hives, we first just stand there and observe them. We could tell there was something wrong with one of the hives. 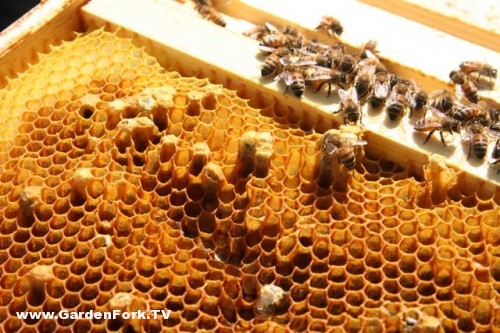 It was quiet, the hive next to it was buzzing with activity.

We opened it up to hear this odd low frequency hum in the hive, not something you usually hear. One look at a brood frame told us we had a bad problem on our hands.

The queen was dead.

And to make matters worse, one or more workers had started laying eggs in the cells, and since workers are infertile, all the eggs are drones. 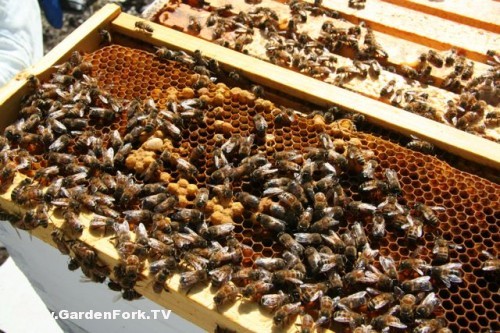 So how can a worker bee lay eggs? If  a hive is queenless, her pheromone is absent, and a few of the workers can then begin lay eggs. It doesn't happen everytime a hive loses  queen, and this is the first time it has happened to us.

One of our Facebook fans explained how she did this:

Rhonda wrote: "Not good. I had this happen last year. I took the hive that had some young bees and some older bees in it and moved at about 2000' away from the original location, dumped all the bees out onto the ground-every one of them, then took the hive body back to the original location. The younger, drone layers had not been out of the hive yet, so they could not find their way back home. I then transferred a queen cell from another hive into that hive and before long everything was good again. I know, it as a bit chancy, but the other options weren't much better." 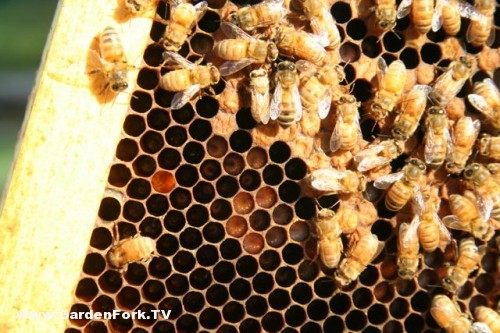 Healthy frame of brood, note the curled up larvae.

The laying workers are nurse bees who have yet to leave the hive, so they have don't know any outdoor landmarks or orientation to return to the hive. The older bees, who are foragers, know the location of the hive, so when dumped out of the hive, they will fly back to its location.

This hive was pretty weak, so I'm thinking right now i'll combine it with the stronger hive next to it, and perhaps split the strong hive in  week or two, with a new queen in the split. * we did the beehive combine, click here to see how to combine beehives

Have you dealt with a drone laying worker? Let us know below