Looking for an easy donut recipe? here it is: The Super Simple Doughnut Recipe. This is Eric's version of the Pillsbury Biscuit Doughnut method of making donuts without the time and yeast. We will make donuts the traditional way soon, but I had to try out this cheater doughnut recipe which uses biscuit dough you buy at the grocery store. Next up will be yeast doughnuts and cake donuts, but we have to do the donut hack here first.

This easy donut recipe works best when the dough is cold, so keep the tube of Pillsbury dough in the fridge until ready. It is harder than it seems sometimes to open up the tube. Be Careful!

Kids like to play with dough, and while you have to teach them a healthy respect for hot oil, they could be involved with this easy donut recipe 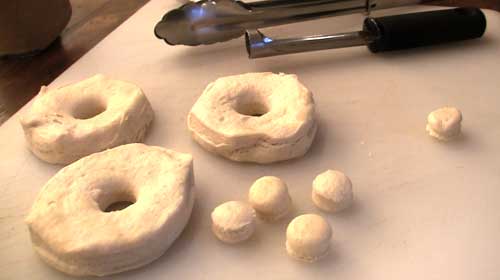 My favorite donuts are the ones you buy at the gas station on the highway exit ramp. Those chocolate donuts in that little package,  six donuts all covered with that fake chocolate. But you know it's fake but you want to eat them anyway. Recently I bought some of those, it was late at night we were driving up the house and they were really good. But these cheater donuts are really good as well, and they might even be healthier for you than the chocolate covered gas station on the highway off ramp donuts. So let me know what you think below do you make these donuts are you making of the kind of donut would be good to hear from you 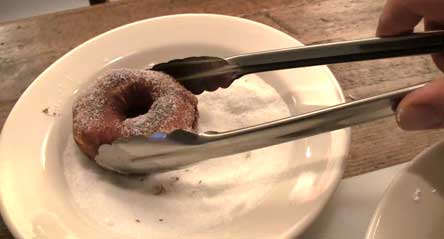 Do you have a great donut or doughnut recipe? And what about this spelling issue between donut and doughnut? Let us know below