Part of our Foraging and Urban Homesteading Video Series, we show you how to forage for foods in your backyard. This foraging video is about the Staghorn Sumac and the tea or sumac-ade you can make from the seedhead of a sumac tree. 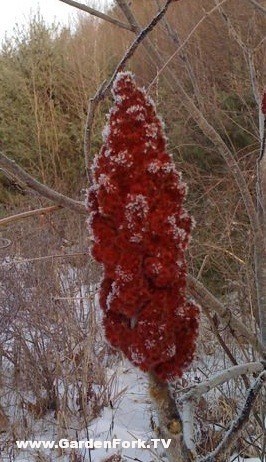 I remembered this drink you can make from a report I did in 6th grade, it was a cookbook of sorts of Native American foods, I think my teacher was underwhelmed by report I did, but this must have had an influence on me, in some subtle way.

In addition to the tea you can make from foraged sumac, the sumac seed pods are used in middle eastern cooking. The seeds are ground and used as a spice powder, added to dishes such as hummus and salads. neat!

According to Wikipedia, the center stem of the sumac was also used by native americans as pipe stems. Sumac also had medicinal uses in Medieval times.

Sumacs grow along forest and field edges, fence rows and the sides of the road. They are called a pioneer plant, they are one of the first bush plants to grow where a field is turning into a forest, or where the soil has been disturbed.

Their leaves are an easy way to identify the plant, especially in the fall, as they have a great red-yellow color to them.

Be sure to know the difference between Staghorn Sumac and Poison Sumac. The names of the plants are similar, but the plants do look quite a bit different. Staghorn sumac has a very unique upright seed head, usually red in color. Poison Sumac looks much more like poison ivy, and its seeds hang downward. 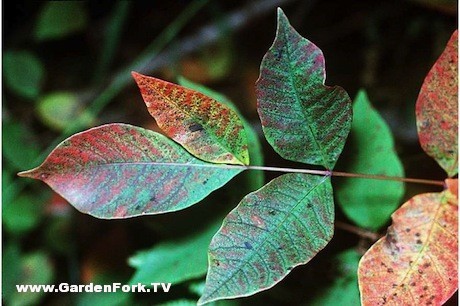 What can you add to our knowledge of Staghorn Sumac and foraging? Let us know below: