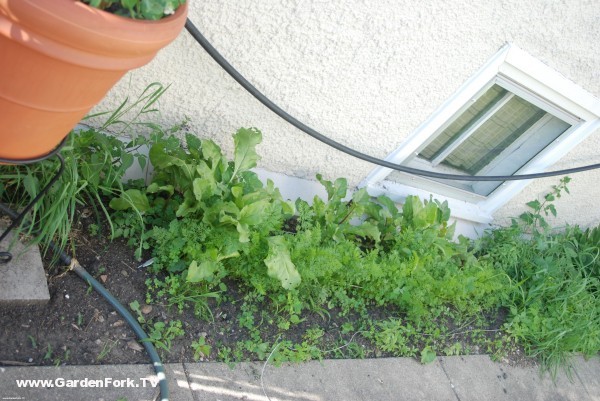 Eric and Mike had talked about seeding some stuff early and I fully agreed with them. Chicago had an early spring and then a nasty frost. I got excited and planted Carrots, Radishes, Beets on March 30th. Well. At least seeds are cheap. There was little activity until the middle of May and the only thing I've harvested are some radishes. The beets are fairly leafy, but the carrots are itty bitty. I think the ground was too cold for the seeds to germinate and should have tried to be patient and waited to plant. 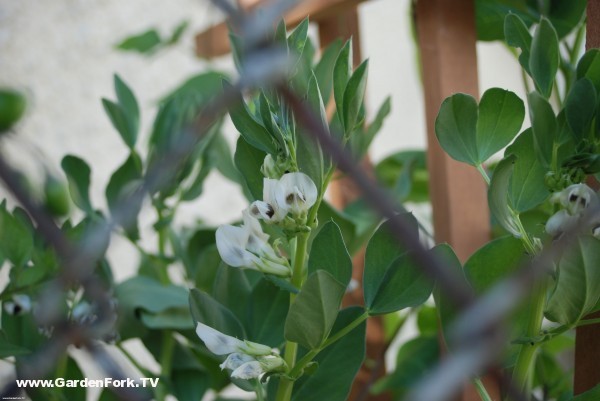 Gardening is about experimenting. In the five years that we've lived in our house, I've found that containers and raised beds work best for me. Along with lots of fencing to keep the dogs out. The hardest thing to learn is that less is more, sometimes. With containers and fast growing plants like beans, you can crowd the pot a bit. In a 24 inch pot, I have four petite peas, three scarlet runners, and three fava beans. They need to be in full sun, so I have to water often. Which is why we have 3 rain barrels. The cucumbers, which I also grow in a 24 inch pot, did not like being crowded by romaine lettuce. I had to resow some cuke seeds, harvested and ate the lettuce, but the new plants look good. 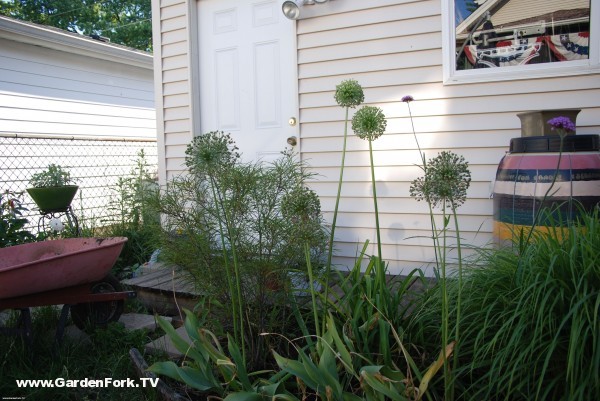 In the open spaces of our yard, we have lots of flowers. Mike learned that boy dogs like to have a target to pee on at the park, well Max does like to pee on things. We don't plant edibles where the dog may pee. I really crowded a bulb bed this year with tulips, allium, and lilies. So far, the spacing and timing of the bulbs has been good. The tulips came first and as they died back, the allium bloomed. I'm concerned that the allium may be crowding out the lilies. We just have to wait and see. The bulb bed is framed by a small leafy shrub that looks japanese maple ish and a super tall thick grass. The grass is allowed to go to seed and dry out in the winter. I've also planted two kinds of lemon verbena with in the shrub and grass. More for possible mosquito rep-lent properties than edible, but I will harvest some leaves outside of Max's aim zone.

The side garden, well was going to be more formal. That's not happening. This is a 20 foot by 18 inch space between the walk way and the neighbor's fence and is full sun. Last fall, I split up the major clumps of peonies, phlox, and yarrow and evenly spaced them. Between those flowers, I planted lots of sunflowers, quiona, for the birds, and bachelor buttons. Originally, I wanted a space that was filled with big blooms and I may still get that next year when the peonies are more settled in their spaces. Now we have a bird feeder paradise. I put a feeder near the garden and the birds just love it. Max and Kora have very little interest in the birds and the birds have learned that.

We need some serious help in the front. It's very neglected. We have some overgrown shrubs and a beautiful ginkgo tree, but the grass on the parkway is just dead. The space under the shrubs is dark and even though we've had some good rains, it's so covered that it says dry. One major bright spot it that a lavender bush returns to the corner of our lot ever year. It's small and scraggly, but it's mine. I've also had sages, thyme, fennel, tarragon, and of course mint, return. Radicchio returned, but was eaten by rabbits. 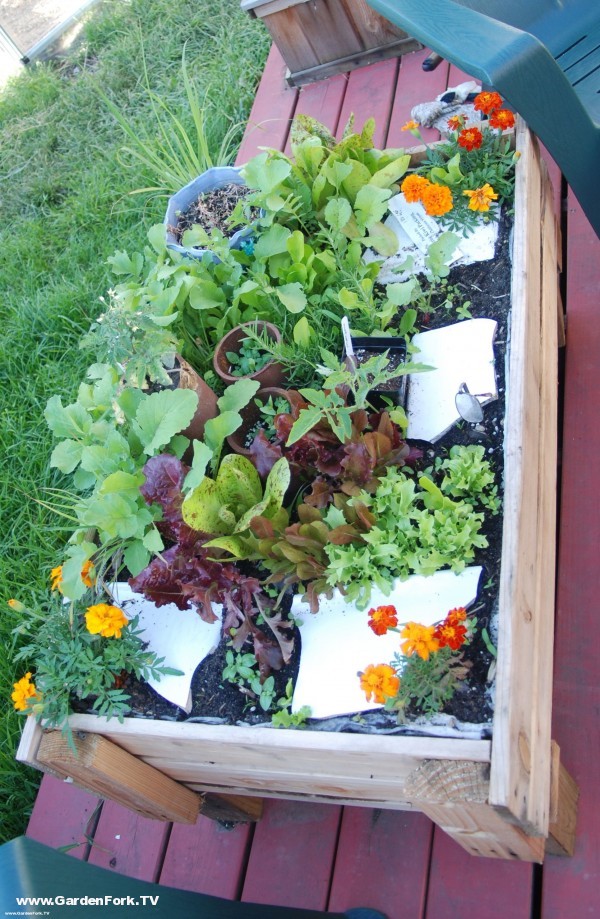 What I've been most impressed with is the lettuce table. The lettuces that I planted haven't suffered in the heat like the lettuces in pots have. The radishes have been very nice. I need to replant the rosemary because it needs a drier environment. We're even having good luck with basil started from seed.

The only thing I'm partly disappointed in is the pepper patch. Marigolds and amaranth are growing well around the patch, but the four types of pepper seeds I've planted haven't come it and it's been warm and wet. I'm thinking that I'm going to have to buy some plants and toss them in the bed. I do have two very nice tomato plants growing.

In general, so far I'm super happy. Jim and I got the green house up last week and he's pushing me to do all edibles in there so I don't have to fight the elements. I'm partly for that. The containers work really well at keeping the dogs, bunnies, raccoons, what ever, out of some of the edibles. Last summer we had a real scare with Kora and a virus transmitted from "wild" animal urine. Kora was vaccinated for the virus, but still caught a random strain.

Hope all of your gardens are doing well too!