A healthy one pot pasta recipe video inspired by Anna Cole. Take your typical one pot recipe, add kale, and turn it from a carb meal into a green meal, at least thats how I look at it. Check out my video, then read through the recipe.

I read about this version of a healthy one pot pasta recipe in the the NY Times Food section, where they reviewed some cookbooks, one of which was Anna Cole’s A Modern Way To Cook.

Cherry Tomatoes Are A Secret Ingredient

Cherry tomatoes are key here, I think. They seem like these pedestrian items, but when you cook them down, they morph in to something more than a store bought tomato. Of course, garden fresh cherry tomatoes are even better, but use what you got. 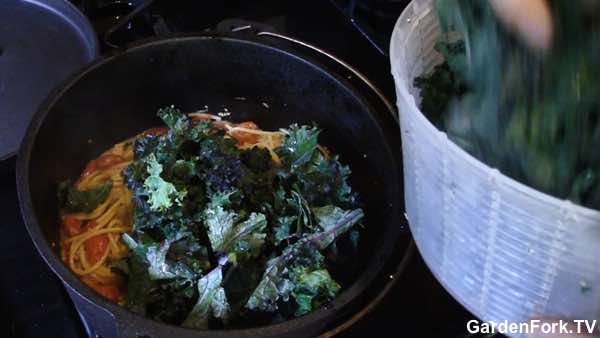 Don’t forget to add the kale!

The pasta and most of the ingredients go in the pot at once, consequently, its super easy to make this. Even I can do it. Of course, I forgot to add the kale, but it worked out OK. As the spaghetti cooks, it releases starch into the cooking water. This starch mixes with the tomato juices to make a nice sauce.

Be sure to mix the pasta as soon as you add it in, and as it cooks. I didn’t stir it right away so the spaghetti stuck together a bit. Keep the lid off while it simmers, I forgot that one.

A healthy one pot pasta recipe that adds kale to amp up the health and taste quotient.

Previous Post: « Cleaning Cast Iron With A Battery Charger – GF Video
Next Post: How To Find Used Brick For A Pizza Oven »