Inspired by my friend Brian, I have been making more of my own yogurt. And after making our How To Make your Own Yogurt video, and our Solar Oven Yogurt Maker, i was thinking of how you could use at  hand items to make yogurt.

Then I saw one of my neighbors had thrown out a styrofoam cooler, the kind that Omaha Steaks uses to ship people their frozen steaks. I took it home and saw that a heating pad blanket fit in it quite well. I cut a notch in the wall to allow for the cord. 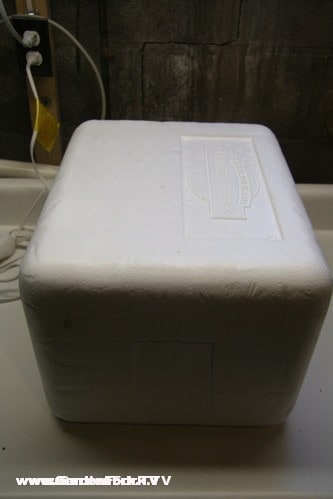 heating pad fits nicely in this

AND, I bought some yogurt starter, Yogourmet is the brand, to see if it was any better than just using some leftover store bought yogurt. And it is much better. The yogurt is much firmer, and i think tastes better. 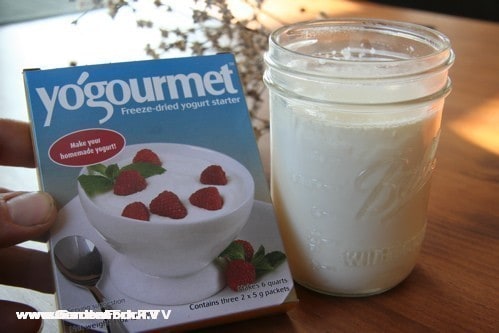 Wikipedia tells us about the origins of yogurt:

There is evidence of cultured milk products being produced as food for at least 4,500 years. The earliest yoghurts were probably spontaneously fermented by wild bacteria Lactobacillus delbrueckii subsp. bulgaricus native to and named after Bulgaria.

The oldest writings mentioning yogurt are attributed to Pliny the Elder who remarked that certain nomadic tribes, including the Bulgars, knew how "to thicken the milk into a substance with an agreeable acidity". The use of yoghurt by medieval Turks is recorded in the books Diwan Lughat al-Turk by Mahmud Kashgari and Kutadgu Bilig by Yusuf Has Hajib written in the 11th century. Both texts mention the word "yoghurt" in different sections and describe its use by nomadic Turks. An early account of a European encounter with yoghurt occurs in French clinical history: Francis I suffered from a severe diarrhea which no French doctor could cure. His ally Suleiman the Magnificent sent a doctor, who allegedly cured the patient with yoghurt.Being grateful, the French king spread around the information about the food which had cured him.

What are your yogurt recipes and tips? how do you make yogurt? please tell us below: