A friend of mine called me and asked if I would help him with a plumbing problem. His utility sink in his laundry room was leaking whenever you would turn on the water. The washing machine also drains into this sink and whatever was always leaking. Not a good thing. I crawled underneath and I took a look; sure enough there was what we would call some 'unprofessional plumbing' under the sink. 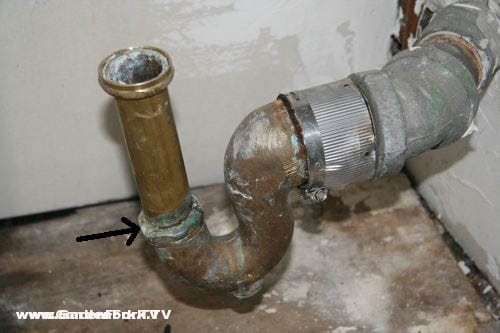 Arrow shows the leak site, notice how crooked the drain trap is.

As you can see from this first picture here there's a 2" plumbing drain coming out of the wall and then a rubber coupler connected to a huge brass trap that connects to an 1.5" brass drainpipe. The rubber coupling does not have enough strength to hold that brass trap in place without any support . Rubber couplings are really good for plumbing but they're not built to hold up that much brass. Looking at the picture here you can see that the heavy brass trap would put stress on the pipe that's going up to the sink itself and the pipe started the corrode at the point where the brass drainpipe meets the trap. And before you know it just falls apart

So I took apart the trap and the brass drainpipe and the rubber coupling to find that there was a stub of metal pipe attached to the 45° angle pipe that's coming of the wall.

2" metal stub with no threads. fun.

My plan, and of course all great plans never come out how we want them to, but I wanted to remove the 2" stub pipe and put in a PVC adapter. The PVC pipe adapter I would use has a 2 inch pipe thread on one end to thread into the existing metal pipe, and and then you can glue PVC pipe to the other end of the PVC adapter. I would then connect a PVC trap to the adapter and then connect the PVC trap to the drainpipe coming down from the sink. 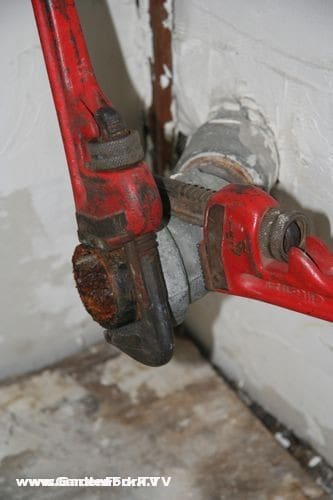 Two pipe wrenches in a very tight spot against the wall

Because the existing metal pipe stub was not threaded, I had to remove it. I put a pipe wrench on this stub of metal pipe and it would not move. I got two pipe wrenches on there and I could not get the thing to move. Part of the problem being that the drain pipe is coming out of the corner of a very small utility room wall so it was really hard to get any leverage on the wrenches. I even tried what I call a large chain pipe wrench - its a plumbers wrench that uses a chain rather than a regular jaw grip - I couldn't get the thing the budge. 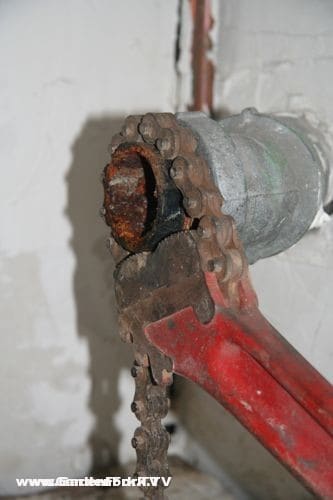 Another way to get this to ancient metal stub out of the 45 degree angle piece it was connected to would be to use a reciprocating saw a.k.a. a sawzall. You could take the sawzall and make two cuts or perhaps three cuts from the inside of the pipe out, cutting the stub in the three pieces and it would fall out.

But then I thought of a Plan B that would be much cleaner and simpler than having to use the sawzall to cut out the metal stub. 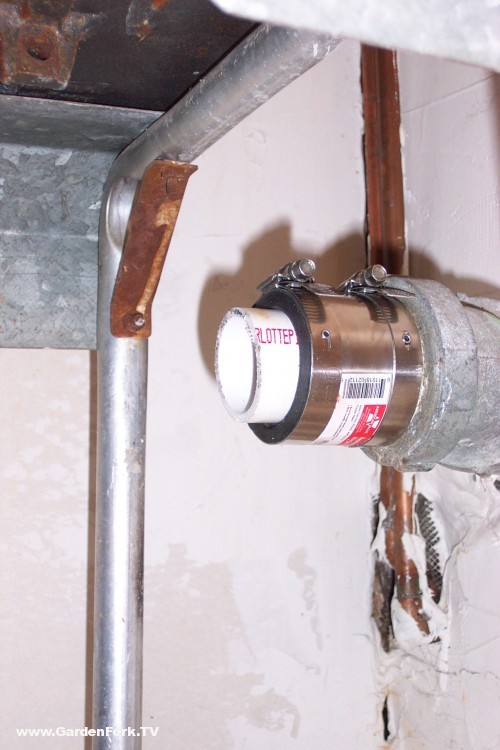 From that 1 ½ inch PVC pipe I can attach a PVC trap and reattach the sink to the trap with a brass drain pipe i already had.

The trap i used is called PVC solvent weld trap. This kind of trap allows you to connect it to a PVC drain pipe on the drain end, and on the inlet side you can connect it to a PVC or brass 1 ½ inch drain pipe from the sink with a slip joint. I glued the trap to the stub of PVC pipe that was coming out of rubber coupling and then connected the trap to the 1.5" brass drain pipe that was sticking down from the bottom utility sink. 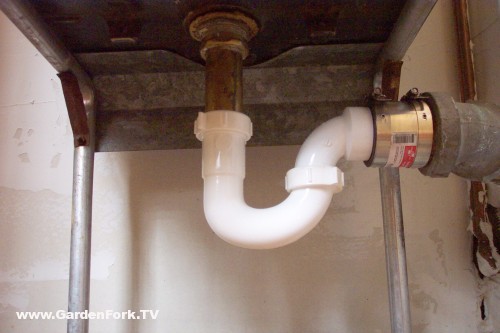 its a beautiful thing, this plumbing stuff.

I've found that sometimes slip joints aren't always completely waterproof, so I always use some TFE plumbing paste with Teflon. It goes under different brand names but it's basically it comes in a tube or a jar with a brush and it's a white plumbing paste that has Teflon in it. I dab this around the circumference of the slip joints and it works really well plus it keeps you from having to take the plumbing apart again to figure out why it's leaking

So after using the Teflon paste on all the joints I put it all together turned on the hot water and it was a beautiful thing. It did not leak.

« I think I broke the dryer : GardenFork Radio
Skeletons Under the Plaster »