Yes, dandelion is edible. There you go. Below the video here are a bunch of photos and info, scroll down after watching!

Dandelion can fall under the subject heading of urban foraging. It is ubiquitous in yards in America. Just make sure it hasn't been sprayed with anything if you are pulling it up out of someone's yard.

I was weeding the mesclun salad greens bed, which i have covered with our Hoop House Cold Frame ( you can get plans for our hoop house and video here )

A lot of dandelion has already come up, and I was surprised at how large the tap root was for such small plants. wow. look at the picture below: 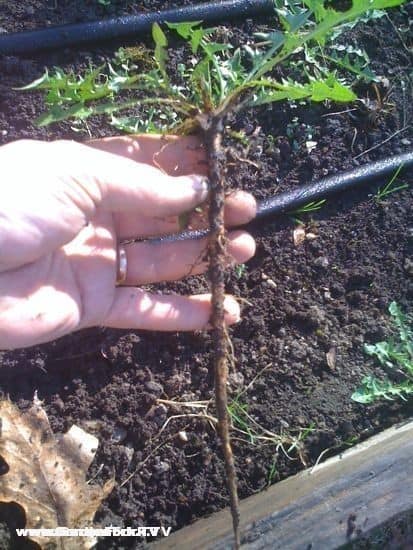 Dandelion has a large taproot. Both the leaves and the tap root are edible, and are used in herbal medicines.

Dandelion is edible. It tastes a bit like arugula, it has a tang to it, if the leaves are mature, it can be a bit bitter.

But bitter can be good in a salad! It offsets raspberry vinegar really well, and it goes well with blue cheese. So stop pulling those weeds and instead harvest them for your dinner plate. 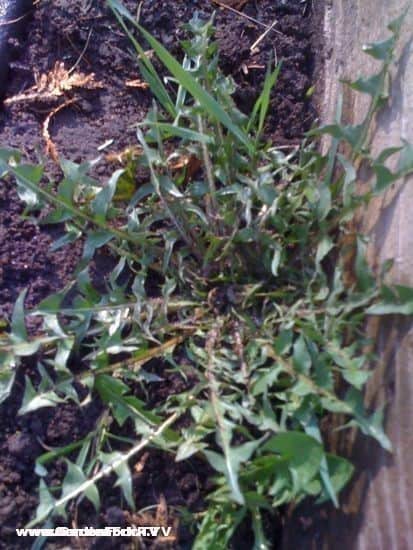 I pulled bunch of dandelion out of our mesclun bed

The younger plants are better, I think, after dandelion has flowered the leaves get tougher, but  you can still eat them. Best way for tougher leaves is to saute them in some olive oil with garlic.

Dandelion is super healthy,  according to the USDA, Dandelion is high in Vitamin K, Carotene, Vitamin A, and Lutein. neat. And this grows in your yard.

When weeding a garden bed of dandelion, I try my best to pull out the tap root along with the top of the plant using one of my weeder tools. If you snap the plant off at the top of the taproot, the plant will send up new leaves. This is a good way to harvest if you have an area of dandelion which is a designated growing area for the plant.

You can buy dandelion seed. I buy a kind called Italian Dandelion, which I believe is not a true dandelion, but it grows really well in my garden, and we like it. 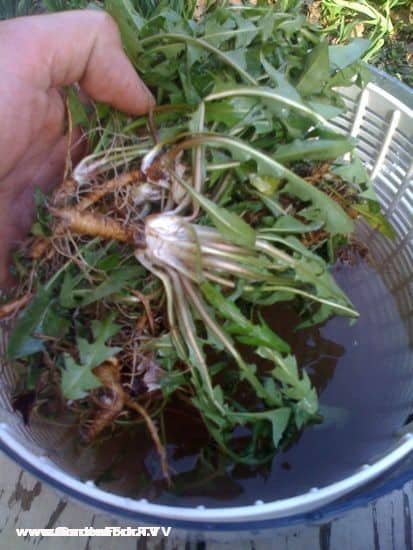 Dandelion after running it through the salad spinner

After I harvest the dandelion, I snap off the taproot, and shake as much dirt off as I can. I then put the greens in a salad spinner and fill up the bowl of the spinner with water. I slosh the greens around, pull up the basket and dump the water. I do this twice usually, then spin the greens. Then I eat them.

Do you eat dandelion? How? Tell us below:

« Rain Gutter Repair
You show up and say, 'Hey, you're doing it wrong' »