I love tv and hate commercials. Two years ago we got  Apple Tv so I could connect to Boxee and watch Internet Tv. Jim and I brought home our first tv and canceled Comcast(1) Cable. For about six months, we were able to watch almost all programs, online with limited or no commercials. All we had to do was down load Boxee and install it in the Apple Tv and have the patience to watch our program after they aired. It was good, but Apple didn't like it, and configured software download thingy to block Boxee. 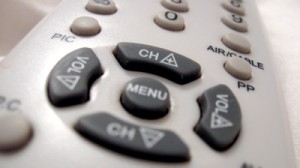 However, with an HD antenna and Apple Tv, Jim and I didn't miss cable. Most of the programs we watched were on network tv and now there are more network channels to watch. In Chicago we have WCIU. They show all the old Twilight Zone episodes and the like. Plus Kora and Max did a commercial for WCIU. (as much as I hate commercials) We were never at a loss for programing.

Our No Cable lasted about a year. We have At&t cable since it's packaged with our internet and phone deals. I'm still not happy with it, but that could also be because I'm not thrilled with television. This is where I get into the whole how much I hate commercials. Why are we paying for cable tv and watching commercials? The commercials are so close together and so frequent that I can not "get into" the program that I'm watching. I'll get up during the commercials and go do something else. Which, you know, isn't always bad. There are just times when I want to relax and be entertained by tv.
When Jim and I got our kitchen done, we designed a space for a second tv. This tv is also my computer monitor. I got a Mini Mac and wireless keyboard and mouse, plugged everything in, and I can watch GardenForkTV and cook. Follow recipes online and watch some of my programs. Networks pull their programs off of sites like Hulu.com and Slashcontrol.com all the time. I rather not "steal" programing.
Eric mentioned on Gardenfork Radio going cableless. I totally support this since I am not happy with the service from either of the two cable providers. Boxee is coming out with it's own "box" that hooks up to the internet. So do some of the video game machines. We're living in an interesting time when it comes to how we watch tv.
All information for how to go cableless I found on sites like lifehacker.com and tuaw.com
(1) I don't like either available cable company and hate having to pick the lesser of two evils.
« Does Eric like Guy Fieri?
How to make Biscuits and Gravy, the Eric Recipe »