We find Rick in his backyard and he tells of about his recent cardiac catherization. It all worked out fine, but Rick was impressed by how easy it was and he was out of the hospital in the same day. Rick tells of about a stroke helmet that may soon be carried on ambulances to determine what kind of stroke a patient is having. The helmet does a sonogram and detects pooling blood. Neat. 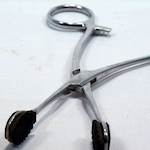 ts a good time to be alive, as we often say on GardenFork. Rick says to tell everyone you are never better. Eric is determined to seek out the good in the world. There you go.

We talk about the power of being positive, and how it gets people's attention, and how positive thinking can be infectious.

Eric tells of the a new video this week, its a garlic scape recipe: Garlic scape frittata . It was based on a recipe by Eric's friend Georgina.

Rick tried the watermelon salad recipe we posted last week, and it is now a favorite. Eric had this dish at the best Sunset Park restaurant, Cafe Zona Sur.

We talk about taking a cruise, prompted by a comment by Jim on a previous show. Rick like cruises, Eric has yet to take one. Jim asks about what to do about the black flies that can appear on worm compost bins.