Last fall I helped a neighbor dig a bunch of potatoes, and we were given a few bushel baskets of potatoes for our efforts. The potatoes were pretty darn simple to harvest, as the garden soil was nice and loamy, it dug easily with a garden fork. The hardest part was not hitting the potatoes with the fork, there were so many of them.

I took our part of the potato harvest and put it in bushel baskets in the basement. I didn't clean or was the potatoes before storing them, I think its best to leave them caked in dirt for the winter. Pretty neat to be able to walk into the basement to pull our of a basket some dinner.

It ended up we didn't eat all the potatoes we had harvested, and this spring, I noticed pale sprouts coming out of the bushel basket, aiming for the basement window. 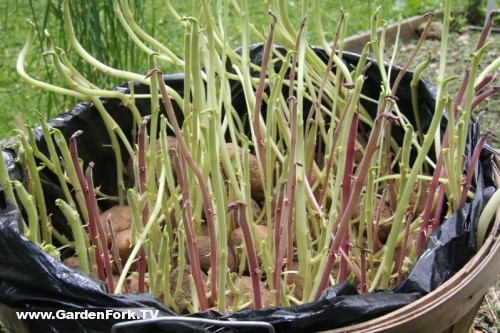 Found this in the basement..

I wasn't sure what to do with the sprouting potatoes, as I hadn't planned on growing potatoes this year. Last time we grew them, we had the Colorado Potato Beetle Invasion, watch the video here. Then this weekend I decided to put them in the garden. If you're wondering how to plant potatoes, its not rocket science, and potatoes are pretty forgiving, which is a good thing, considering I'm the one planting them.

The potatoes had become a tangled mass of sprouted seed potatoes, a giant ball of roots, potatoes, and sprouts.

I dug out part of one of our raised beds, added some time release fertilizer and azomite, a rock powder, and gently planted the seed potatoes. 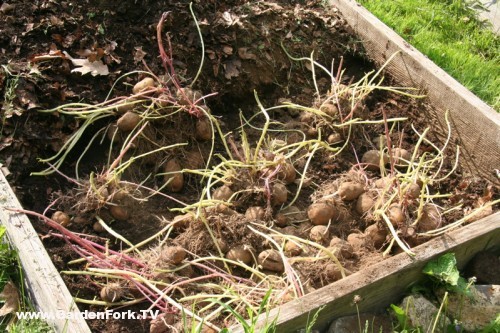 laying them in the bottom of a raised bed

As I covered the seed potatoes with dirt and leaf mulch, I tried my best to get the potato  sprouts to point up thru the soil. 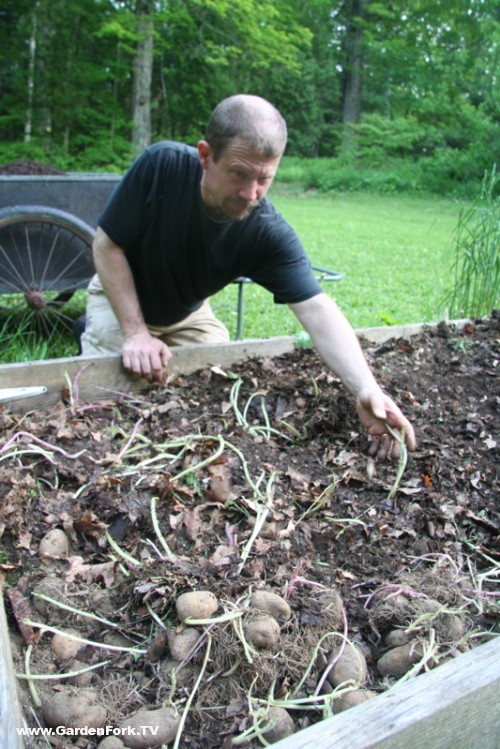 Not sure what's going to happen, but I think the potatoes i planted will be good. I'll mound the potatoes once or twice with mulch  or some straw or other compost like material, and I'll work on the Potato Beetle problem.

We made a GardenFork.TV video about how to hill your potatoes, its the first one we shot with Henry, one of our Yellow Labradors, when she was a puppy. Its fun to watch.

What do you think is the best way to plant potatoes? Let us know below: