Aquaponics and Aquaculture How-to has been taking up a lot of Rick's time. Below Rick tells us what he has learned about how to build an aquaponics system. Eric 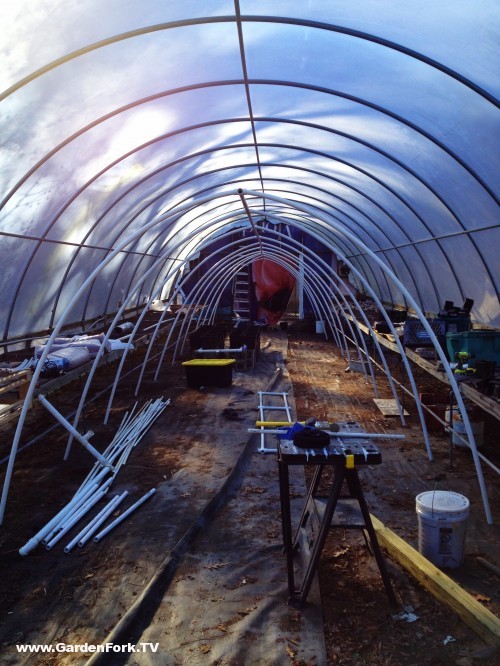 I haven't been around the Gardenfork site very much, been busy in the greenhouse. But for the last few days rain and, particularly, mud has kept me away from the greenhouse, so I thought I'd update you on my progress on the aquaponics project.

Of course, everything is harder and takes way more time than you think it will, so I have not made as much progress as I though I would by now. 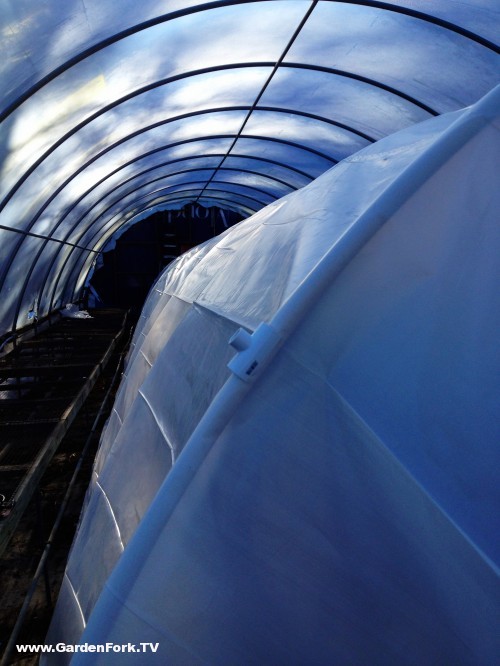 4 mil plastic from the Blue Store comes in 20 ft widths on 100 ft rolls, just what I needed.

Last time I wrote that I wasn't going to build the inner tunnel inside the greenhouse because the winter was so mild here in Tidewater, but I changed my mind.

I've got 40 tomato seedlings just sprouting in the spare bedroom at our house, snuggled in and just getting a start in life. And I am already 2 weeks behind in getting the seeds sprouted, so any more setbacks would be devastating. 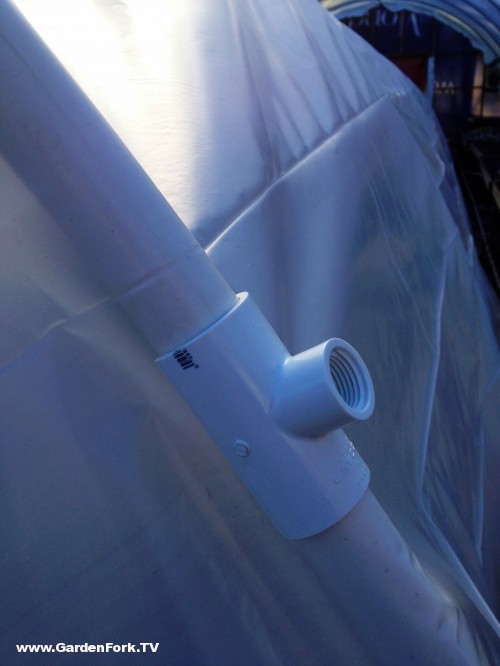 Clamp-On PVC over tubing to hold plastic to frame and tension the skin. 4 clamps, two per end.

That's because, as I mentioned previously, this project has to pay. So if this crop craps out, I'm losing much more than 40 seeds; I'll lose the early crop.

Not only do the tomatoes have to "make," but they have to be early enough in the spring to demand a higher price at the Farmers Market. Early local tomatoes are worth gold. Late July tomatoes are nearly giveaways. So we decided that it would be pound foolish to not go ahead with the inner tunnel. 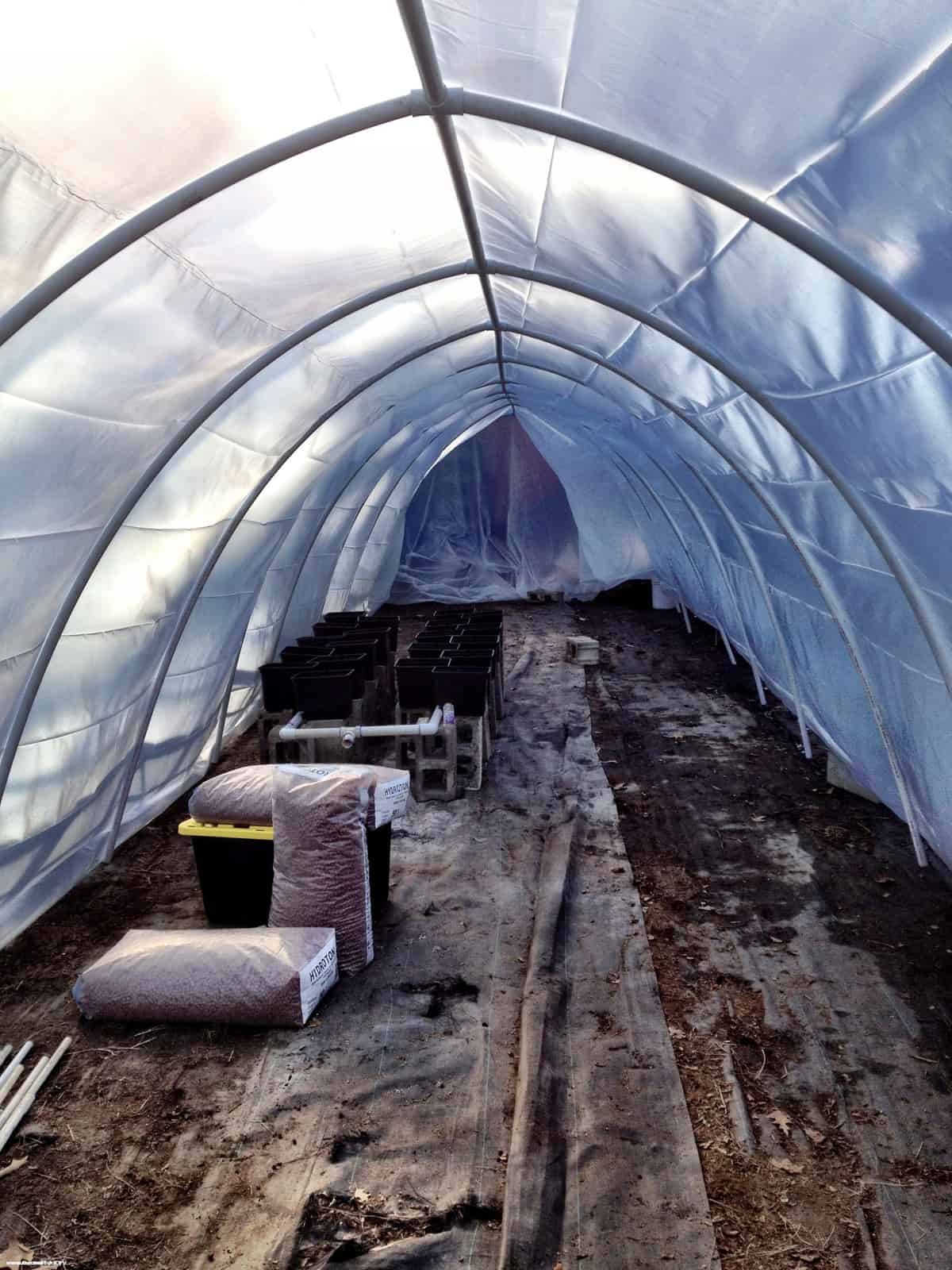 inside the inner cover (that's the Dutch Bucket system in the back left, waiting for the tomato sprouts)

I'll be growing the tomatoes in Dutch Buckets.  (I'm working up another post soon explaining how Dutch Buckets work.)

Dutch Buckets (also called Bato Buckets) are something you can do in your house, as long as you have enough light and enough warmth, particularly for tomatoes and peppers.

. As you can see, it's nothing but 1-inch ID PVC in 10 foot lengths, joined in the center by a PVC 4-way cross fitting. The rib spacers at the peak are 5 foot long. 8-inch long galvanized nails in the ground stick up for the ends of the PVC to slip over.

It's a flimsy, wobbly affair. It won't stand a gust and in even moderate heat the ribs will sag. But it's quick and cheap. I'm using all 1-inch ID PVC in my plumbing, so as the temperature goes up and the inner cover comes down, I'll be repurposing the PVC to the irrigation system as I expand.

The Fish Tank, is another matter all together. Here's my first try at the platform: 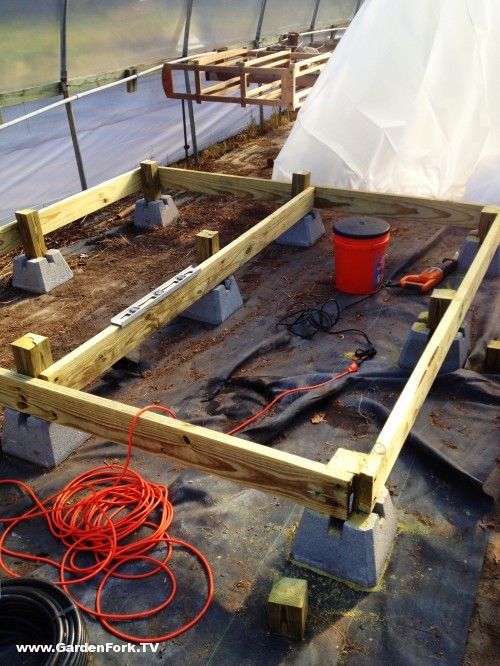 The problem is that I didn't show this design to anyone before I built it.  She, who must be obeyed, took one look at it and said, "why not have the 4x4s tall, to help contain the tank?"

Fortunately, I put it all together with screws so --after another run to the Blue Store-- I had some 5 ft long 4x4s for along the outside edges. I also added more of the cement blocks, so that no span is unsupported for more than two feet. 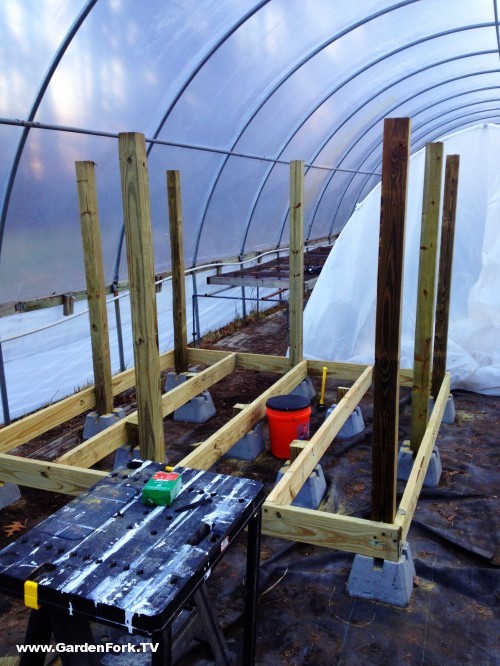 Redone...with the 5 ft supports all around.

The key to Aquaponics is the bacteria.  You can have all the fish you want and all the plants you want, but they'll both DIE if the proper kinds of bacteria do not colonize your system or if the bacteria are unhappy.

If it dries off enough so that I can get back there with a truck this week, I'll deliver the --damn heavy!-- 4 x 8 ' sheets of ¾-inch treated plywood for the sides. I'll put sheets of interior insulation and a fish-safe pond liner inside the tank so it's water proof. I'll also band the top, middle and bottom of the tank around the outside of the 4 x 4s. 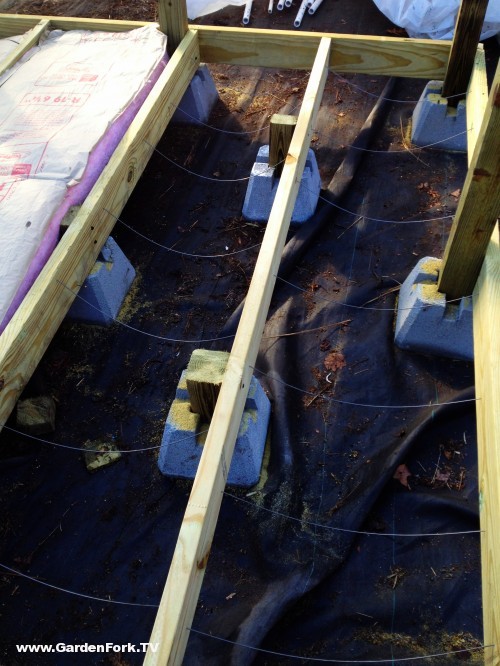 Insulating under the platform 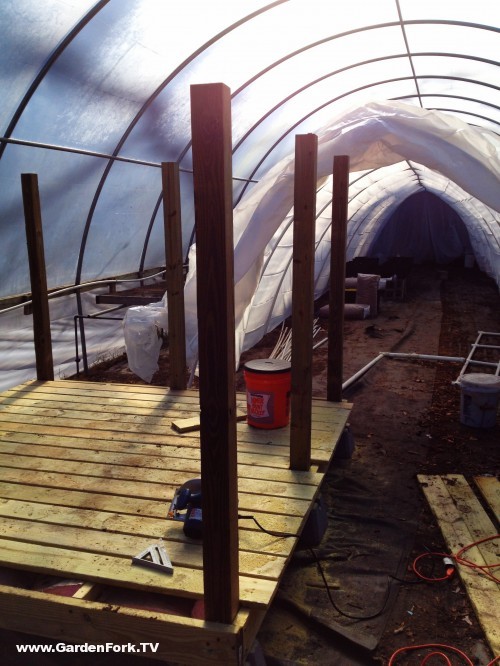