This is the first of a series of articles about how to cook in a dutch oven, dutch oven recipes, and how to season cast iron and dutch ovens by Gary House, of Cooking-Outdoors.com. A big thank-you to Gary for contributing this.

The first time I ever saw a Dutch oven in use was on TV. I remember it quite well as I was sick in bed flipping channels on TV and up pops this show about cooking outdoors and they were using a Dutch oven! Even as sick as I was at the time, I knew this was something I had to try, something new and exciting for the family and I. After lots of research, I finally decided to buy my first Dutch oven, a 12” camp Dutch oven seemed just about what I needed to start with. 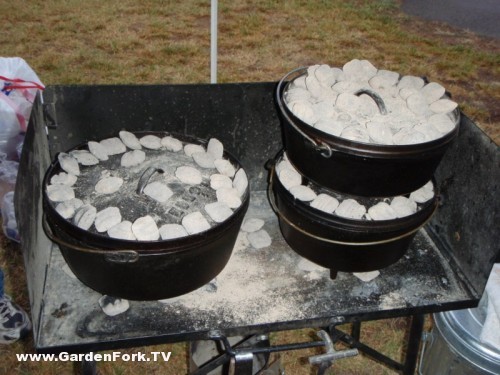 The day my Dutch oven arrived, I was so excited and eager to get cooking but I had to “season” my Dutch oven first. Therefore, a day later, I was able to start cooking and it could only be a Mixed Berry Crisp for me. Of course, the day had to be a miserable one to initiate my new Dutch oven; cold, misty, windy as it was, I started cooking! 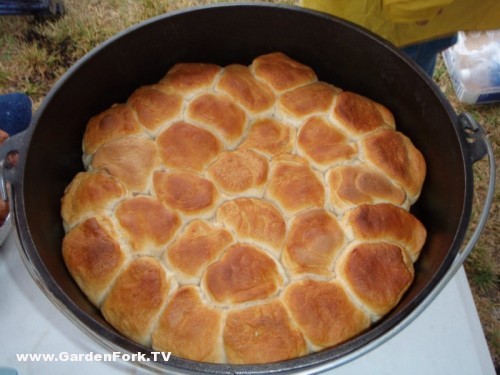 I had just recently built a new fire pit in the backyard and the plan was to cook in the fire pit just as on the show I had watched. Plans change, weather was bad, so I fired up some charcoal to start my dessert. Turns out I was going to do this little adventure alone. The family event turned out to be a “me” only event, well it was a bit cold and misty out after all.

Guys are notorious for just standing around watching this cook, that’s way we love to barbecue, looks difficult and you have to stand around and watch. Well, now you can get a visual of me “watching” my Dutch oven cook in the misty weather outside. Overlooking our backyard is this big bay window; gives you a great view of the yard from inside the house. As I am cooking, I happened to look up from my strenuous task and there was the whole family watching me and laughing at me as I stood in the misty weather “cooking”. 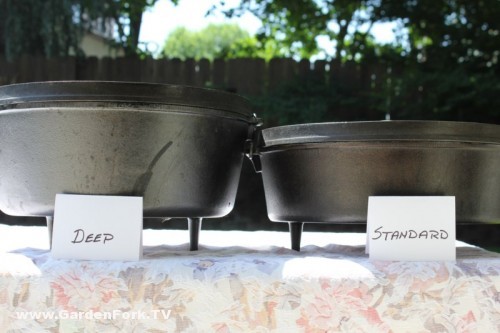 Undaunted, I continued with cooking my Mixed Berry Crisp until the first “whiffs” of cinnamon started to float out of the Dutch oven and I can say without hesitation, I was hooked on Dutch oven cooking from that second forward.

I have learned a ton of stuff over the years about cooking outdoors, met many new friends and have found a wealth of information in many locations. The most important lesson I have learned during all of this, is to share what you love, often and willingly. Dutch oven cooking is easier that you think and I would like to get you started with your new adventure!

A “Kitchen” Dutch oven is the most common Dutch oven found. Characteristics are a rounded dome lid, porcelain coated (some) and are also available in oval shapes. All are cast iron and designed for in house cooking but do not hesitate to place one on your grill outside. They work perfectly!

A “Camp” Dutch oven is the most familiar one, recognized by its three legs and rim around the lid. Made of Cast iron and is the one I will be discussing in these articles.

A “Pack” Dutch oven, used for rafting and horse packing trips is made of aluminum, they are very lightweight and easy to transport.
Dutch oven sizes can vary from a 5” model to a 25” behemoth that can weigh in over a hundred pounds when filled with food. Here are the sizes available: 5”, 8”, 10”, 12” – Standard, 12” – Deep, 14” – Standard, 14” – Deep, 16” – Standard, 16” – Deep, 25” and more for custom Dutch ovens. Note that “Camp” Dutch oven, are measured by diameter as opposed to “Kitchen” Dutch ovens that measure in quarts. “Camp” Dutch ovens also have quart equivalents but commonly referred to by diameter size only.
The difference between “Standard” and “Deep” Dutch ovens is the quart capacity. The “Deep” Dutch ovens hold about 1 to 2 quarts more than the “Standard” size. They are great for holding stews and larger portions of meats that need more height clearance.
Choosing the correct size Dutch oven for you.
The following chart should give you some idea of the size oven that you should buy. (http://www.nwdos.org) 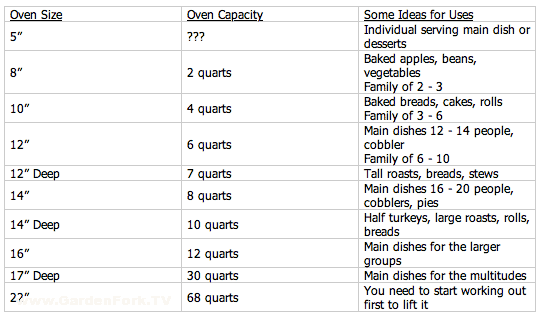 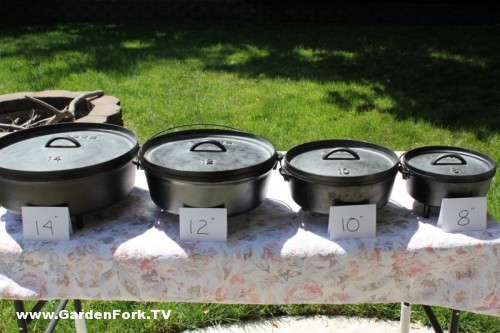 My recommendation is to choose a 10” or a 12” Dutch oven; no need to get a deep version yet. You will be seriously surprised how much food these produce. Stick with brand names such as Camp Chef and Lodge, their quality is the standard and your Dutch oven will last in your family for hundreds of years if your grandchildren do not sell it on Ebay first.
Next time we will discuss the types of accessories and tools you will need to get started. I laugh when I think of my expensive tools and accessories I used for my first cook on that first Dutch oven adventure; a pair of pliers and a garbage can lid … 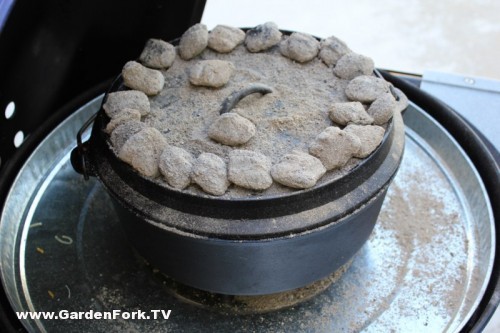 See ya around the campfire! 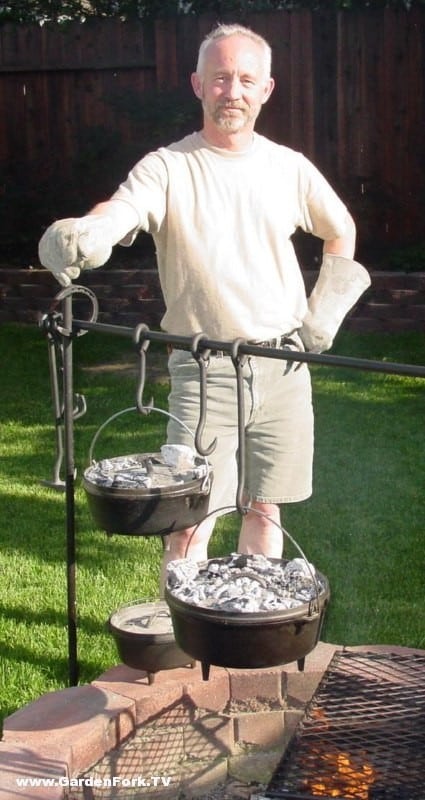 Part One of a Dutch Oven Cooking Series by Gary House, creator of  www.Cooking-Outdoors.com; an excellent source for all things about outdoor cooking, including Grill & Smoker reviews, recipes, and videos.

Gary is also the host of a new DVD, Taking Your Dutch Oven To The Max, using the dutch oven to smoke, grill, and even make ice cream.

Listen to Gary on this episode of GardenFork Radio talk about how to season cast iron, how to use a dutch oven, and dutch oven recipes.

« Inside the Hive: Views from a First Year Beekeeper (Scene 6)
Wedding Etiquette For Eric GF Radio »