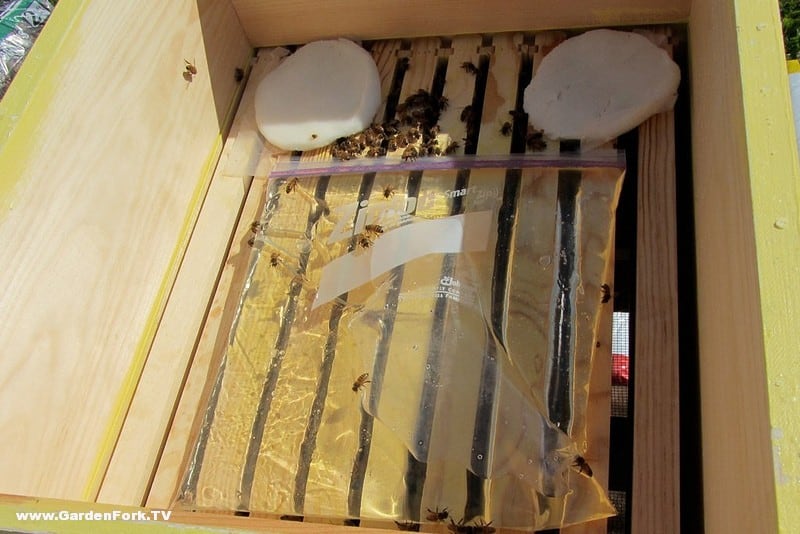 I wanted to talk about a couple of topics related to this photo - mite control and wax production. There are two mites which are parasitic in the honeybee hive - the Varoa Mite, which literally sucks the life out of the bee externally and the Tracheal Mite which feeds of the bee from within its respiratory system. Varoa is large enough that one can see it with the naked eye while Tracheal mites are too small to see without a microscope. In the upper part of this picture are two "grease patties" which are made of equal parts of vegetable shortening and sugar. Mixed and formed into a patty, these are most easily handled by putting waxed paper between them. Sometimes folks will put some essential oils in the mixture, such as wintergreen. The idea here is that the bees are attracted to the sugar in the patty and get the vegetable shortening on them, greasing them up a bit. Tracheal mites are spread bee-to-bee and have considerable difficulty with the grease. There are a number of ways to deal with tracheal mites, some of which are more harsh than others. What I like about the grease patty approach is that it is something that is both inexpensive and harmless to the bees. These patties go a long way so you dont' need a bunch of them - maybe one or two per hive per year. How effective is the grease patty treatment? I don't know, quite honestly, but it is mentioned quite often.

The zip-top bag (When J&J starts sponsoring GardenFork, I'll consider using its brand name) in the picture is called a "baggy feeder" and is filled with a 1:1 sugar syrup (1:1 by weight, so 5 pints of water to a 5 pound bag of sugar) that is super simple to make - you could just put the water in the sun and stir the sugar in after a few hours of letting it heat up. Alternatively you can heat the water a bit on the stove (no need to boil it whatsoever), take it off the heat and stir in the sugar. Fill the bag and seal the top. Then lay the bag down on its side (making sure the top is zipped) and cut a small slit in the side of the bag so that the air escapes and the sugar syrup oozes out a bit. As the bees walk on it, they'll be able to feed on the syrup that comes out.

Now, the idea with the baggy feeder (or any feeder for that matter) is that the bees in this new hive require a considerable amount of energy to produce wax to create comb on the frames and to fly about and forage. They'll certainly go out and find nectar but providing a ready source of sugar water gives them all the food they can eat right in the hive and helps the bees "draw out" the comb quickly. In a new hive there's a lot of wax to produce and shape into comb and the bees will readily take this syrup up and produce remarkable amounts of wax in a short time. As I'm not getting honey from the hives this year (at least this is my expectation), I don't mind the bees feeding off of sugar water. When they are producing honey for human consumption, you'll want them to be creating it from nectar rather than just storing up sugar water. I wouldn't want to purchase (or sell!) honey that was just converted sugar water.

Matt (twitter @MattInTheGarden) likes sudoku, minesweeper and the "Ticket to Ride" board game. He's a huge fan of Ze Frank and enjoys the listening to Dan Carlin's Common Sense. He's got a "live and let live" attitude toward life and enjoys a good cheeseburger and baked potato wedges with roasted garlic spread on them. In his spare time he writes software.