OK. This is one of those wow things. I was doing more research today on how to make a portable wood fired brick oven for pizzas and bread for an upcoming Gardenfork.tv show.

Thru the Make Zine post I click on a link to pizza fanatic Mike Sense, who hosts two DIY tv shows, Science channel’s Punkin' Chunkin' and Catch It Keep It. (Mike on Twitter here.) 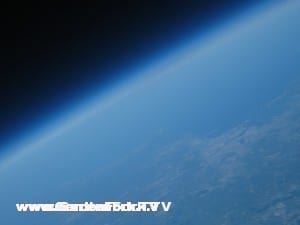 I start reading thru Mike's blog, and he has posted about these two MIT students who built a near space camera rig out of a styrofoam cooler.

I keep saying I was born a few decades too early. In college we did not have GPS cell phones and cheap digital cameras. Now they do, so you can build your own near space camera.

So you can make your own rig that will go up 17.5 miles into space, take great pictures, and then find the thing when it lands ( with a GPS cell phone ). 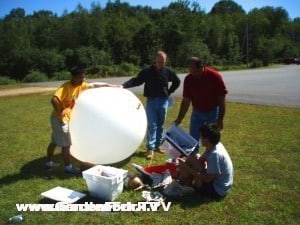 Preparing the balloon - photo from space.1337arts.com

Oliver Yeh , Justin Lee, Eric Newton did just that. Their website has great pictures and a PDF of how they did it.

Here is a complete how-to PDF on how they did it. And here is the home page of their space photography site for more info and consider donating a few bucks to further their projects.

Doug Clarkin built a space camera based on their PDF and here are some photos of his launch. I really like that Doug did this with his 6 yr old son.

Just super cool, i think. I doubt I'll ever build a near space camera cooler, but its great to know you can for $150. I will build a pizza - bread oven. Thanks to Mike for the pizza info and the post about this.

Here is a video they made:

« The Art of Eating In, a new book by Cathy Erway
Bees Don't Poop in their Hive »