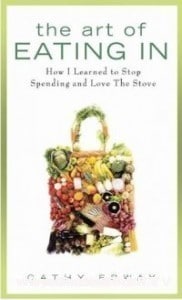 I've met Cathy Erway a few times, the first was at Emily Farris' Casserole Crazy competition ( we made a GF show about it here ) She's well known in the Brooklyn Food world, and I really like her blog about cooking in. Its not fancy food, its home food, but thought of in a few new ways.

Like right now Cathy ( according to her blog posts ) is really into using apple cider as a braising liquid. Something I would not have thought of - but then I don't get many original ideas in the kitchen.

Now Cathy has published a book, The Art of Eating In:

Rediscover the joy of home cooking through the eyes of one Brooklynite who swore off restaurants for two years. The story behind the scenes of Not Eating Out in New York, The Art of Eating In chronicles Cathy Erway's journey through the underground of NYC eating, and her favorite recipes along the way. Two years, three apartments, countless food events and some strange restaurant-free “dates” later, she was able to turn eating in into something of an art, rather than mere survival.

You can learn more about Cathy's book here, and read her blog, Not Eating Out in NY here.

« I Know How To Cook : The French Book
From DIY Pizza Oven to DIY Near Space Camera »