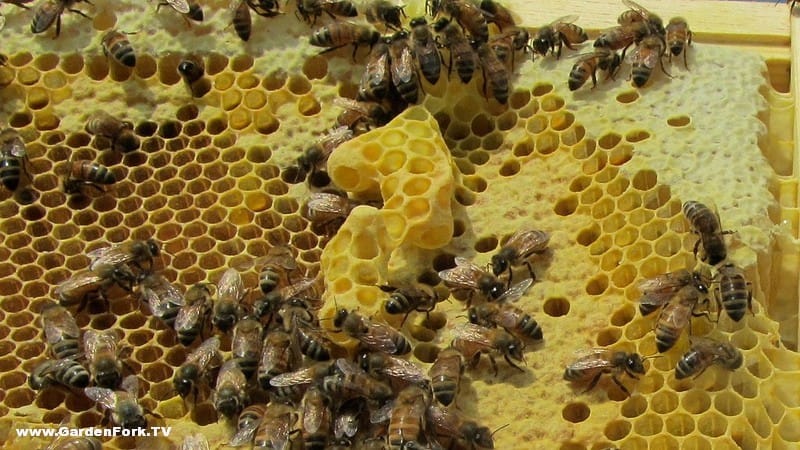 The queen is dead. Long live the queen.

Well, not yet. And perhaps not for a while. But since I've got an interesting picture here, I want to write a bit about the topic.

So, there is a bit of wiggle room in the hive - there's space between the frames and if not spaced evenly by the beekeeper or if the frames don't have drawn comb on them, the bees have space to make some non-uniform comb. In the center of this image you can see some comb that is sticking out from the rest of the generally uniform cells around it. These larger ball-shaped cells are called "queen cups" and are cells specifically set aside for raising queens. If an egg is deposited there by the existing queen and then the workers feed it a special diet of royal jelly, a queen will develop. The queen cup will eventually be extended out and look like a peanut, so they are easy to spot in a hive.

Now, the location of these queen cups on the frame indicates that they would be used to create new queens to replace or "supersede" the current queen. The existing queen, if it begins to fail, will likely alert the other bees in the hive that they need to find a replacement for her. She does this through changes in the pheromones she produces. If the workers believe she is failing, they'll go into "make a new queen" mode.

Supersedure is a normal part of hive life. The hive needs to thrive and can't do so with a weak, failing queen. The strongest new queen will typically kill off the other new queens, often before they've emerged, and take over the hive. This may sound harsh, but the hive's survival depends upon a strong queen as only she has the ability to create workers - and new queens.

If the queen cups were along the bottom of the frame, then that is an indication that there is the potential for a swarm to occur. Swarming is also a normal part of hive life, providing a mechanism to split the hive into two hives. When a swarm occurs, the old queen leaves the hive with a portion of the hive leaving a new queen behind with the remainder of the hive.

I'll certainly be on the lookout for changes to these queen cups and relay anything I learn about them.

Matt (twitter @MattInTheGarden) hated raw tomatoes for the first 40 years of his life but now enjoys them. One day he would like to hike the Appalachian Trail. He regularly torments his kids by making up advertising jingles for hole-in-the-wall businesses they see when driving down the road. His lovely bride puts up with his shenanigans.