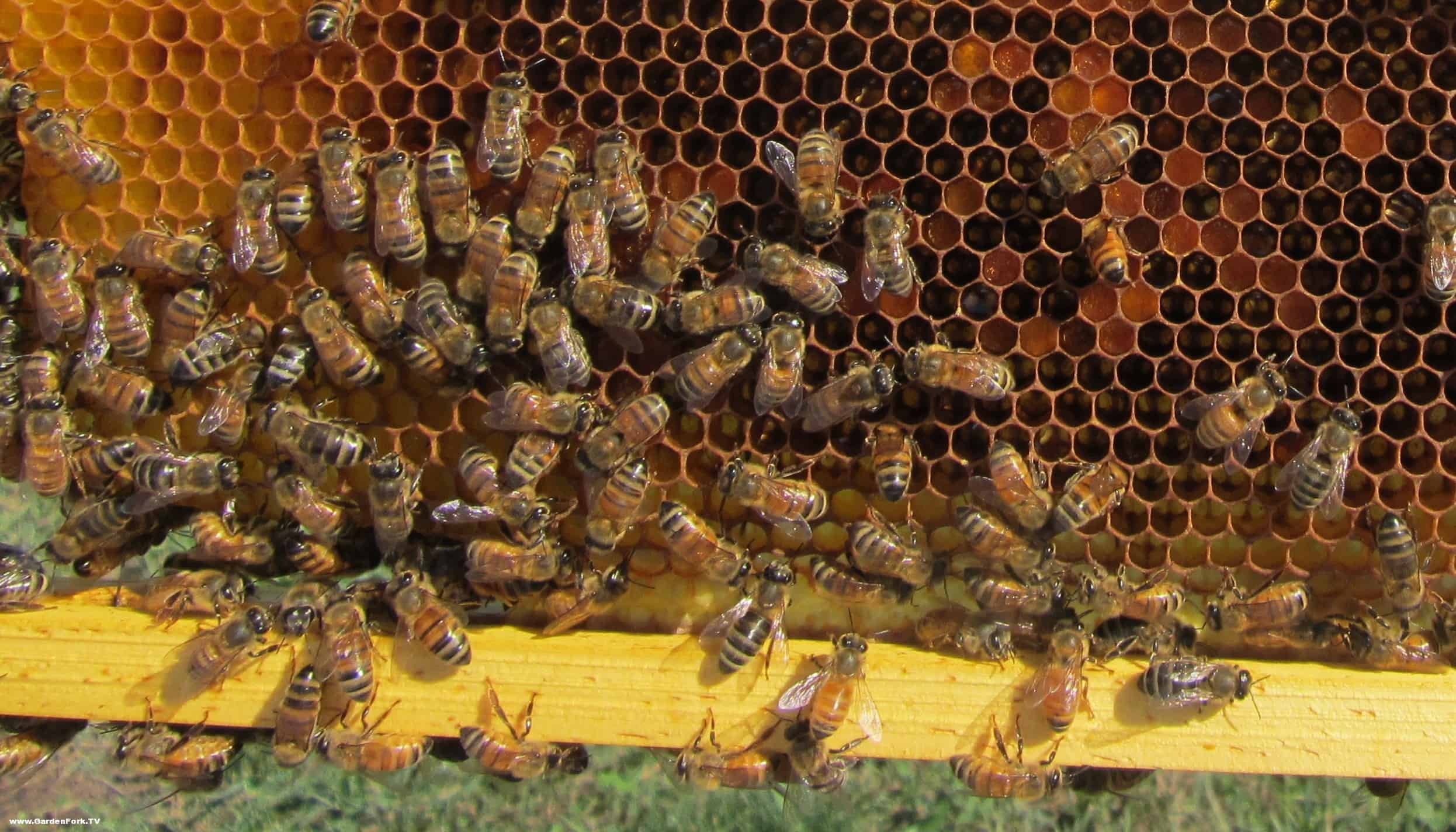 Here I've got a photo from my recent hive inspection of hive #2. As you can see, the bees don't all look alike. Oh, sure they have wings and are  about the same size but their coloration varies. Along the bottom of that frame in the middle you can see some very yellow-orange bodied honeybees and some that are black/dark gray and a dull grayish yellow. In fact there is quite a variety of coloration and banding on this frame.

Mostly this is due to genetic variation among these honeybees. The queen mates with many different drones and so there is almost certainly going to be a bit of a "melting pot" in the hive. Over in hive #1, I had an Italian honeybee queen and most of the initial workers in that hive looked like Italian bees. But as the hive has grown, there has been a bit more variety in the bees in that hive, but certainly not as much as in hive #2, which my beekeeping mentor, Lindi, called "mutt bees" - I suspect the queen in that hive is some cross. Mix the genes of this queen with a variety of drones and the genetic diversity increases.

Genetic diversity in a hive is a good thing.

If all the bees in a hive were genetically identical - clones if you will - their particular genetic makeup might make them less hardy in adverse weather conditions, maybe it would make them more prone to succumbing to disease. You get the idea. The hive thrives by having a diverse population. The idea behind natural selection is that those traits which are advantageous for survival given the current situation will give the bees having those traits a leg up on those that don't have those traits. So in a hive where the population is heterogenous, some might succumb to a disease or perhaps mites while others may be less inclined to be affected by that disease or the mite infestation. If the queen is one of those survivors or some of her drones are among those with superior genetics, the result will be that those traits will have an opportunity to be passed on via sperm and egg. The queen that doesn't make it, or the drones that don't make it won't pass their traits along, of course.

This doesn't, of course, mean that these honeybees are moving toward perfection... their population is just affected by their genetic makeup and the world around them. What affected population N and caused certain members of population N to die off might not affect population N+M. In fact, it is possible that population N+M might be affected by something to which those from population N that died were better suited to survive. Interesting, huh? Well, at least to me. The point is that the world is a dynamic place and selection doesn't always mean improvement. When the conditions change, populations have to adapt or they won't survive. Genetic diversity provides better odds that the population will survive.

Matt (twitter @MattInTheGarden) would like to teach the world to sing in perfect harmony but he'd be happy if the folks that can't carry a tune would just hush it already. Seriously folks, you're killing him with your off-key renditions of "Call Me Maybe". Matt loves to play backgammon, go, and chess. He stinks at two of the three of those - guess which? His favorite Partridge was Laurie, of course.

« Inside the Hive: Views from a First Year Beekeeper (Scene 21)
We don't like candycorn GF Radio »