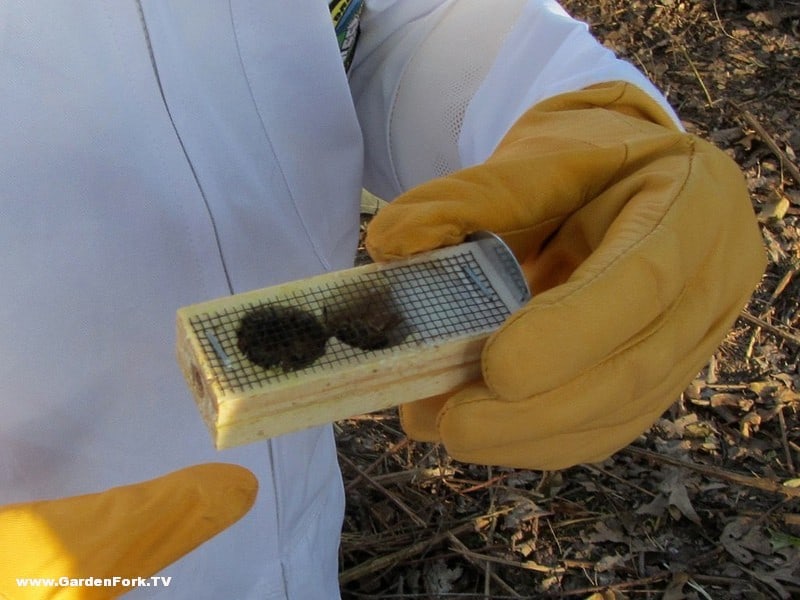 This block of wood that has been drilled out and covered with some screen is called a "queen cage" and holds, as you might suspect, a honeybee queen. There are other styles of queen cages but this is a pretty common one. The process of producing bee packages involves literally shaking worker bees into a screened box approximately the size of a shoebox and then sticking a queen cage in the box. The bees in the box don't know this queen and might not know each other either. The queen cage is suspended in the package box next to a can of sugar syrup and is held in place by the metal disk that you can see in this picture. Each end of the cage has a hole with a cork in it and one third of the cage is taken up by a piece of candy, something the consistency of a stiff marshmallow.

Along with the queen bee are some "attendant" bees who have been with her and know her. They keep her company and, like in the hive, attend to her needs. When the package is installed, the queen cage is removed and placed in the hive. There are a number of ways folks do this - some wedge it down between the frames. I stuck mine screen-side down between two frames. The important thing to remember is that the cork on the candy side needs to be removed if the queen is to be released.

The cage keeps the bees from killing the queen before she has had time to convince them that everything is cool and that she's the queen of the hive. Remember - these bees were all shaken together into a box and have spent some amont of time traveling to their destination. Things are a bit messed up in their world and, like all honeybees, they thrive in an ordered world and really don't like it when their world is upended by humans shaking them into some box and shipping them to some far off land. The queen produces pheromones and generally speaking these will convince the workers that things are looking up in their world. Occasionally they will kill the queen anyway, but this isn't typically the case. It takes some time for the attendants to eat the candy from the inside out and the bees in the hive to eat from the outside in. And, like the Apollo-Soyuz, they do a meet and greet in the middle. By the time this has happened, the queen is accepted and everyone begins to do their jobs - making wax, foraging, laying eggs, etc. Pheromones keep the hive humming along and are one of the ways that the bees communicate with one another.

Matt (twitter @MattInTheGarden) has a head full of questions. He likes the simplicity of the metric system and wishes the USA would just take the plunge and switch over already. He couldn't care less about what celebrity X is currently up to and can't understand why anyone would spend money on magazines like People. He favors the crayon color Raw Umber, introduced in 1958 by Crayola.