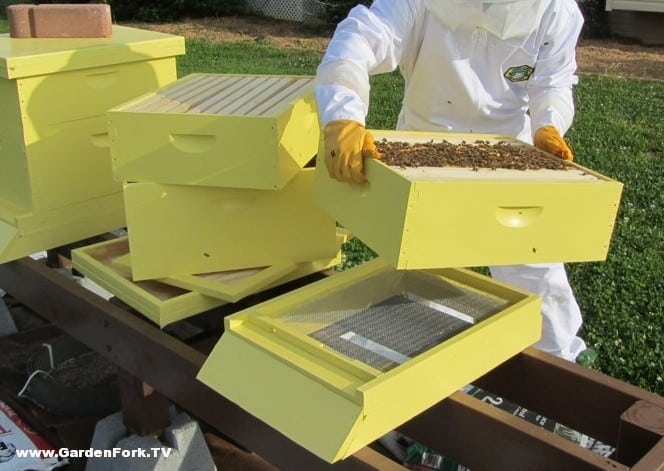 This picture is from the installation of hive #2, which is from a nucleus hive, commonly called a "nuc", from my beekeeping mentor's bee yard. My mentor has eleven hives and this year had a half dozen nucs as well. Our beekeepers association encourages new beekeepers to buy nucs from local folks. This is a good idea for a number of reasons, not the least of which is that each nucleus hive inspected and sold locally is one less package from out of state that is shipped here. Why is that good? Because the nucleus hive is 4 or 5 frames of fully drawn comb with bees, a queen, brood (eggs, larva, capped brood) and some stores (honey, pollen, etc.) and the bees are already well establish with the queen and don't have to spend a lot of time and energy drawing out comb before things get moving in the hive. The queen is already mated and laying. These are good things.

My son and I enjoy working the bees together. He's a fine teenager and a very calm and methodical person around the hives. He exhibits some of the characteristics of a good beekeeper, particularly knowing not to rush. Here he is setting up the hive  himself. I mostly just took pictures during this install.

Our hive sits on a hive stand. Mine is painted brown (because I had brown paint) and it gets the hive off the ground and up where it is easier to work. Raising it up provides more ventilation and keeps me from having to bend over so much. Some folks use pallets, cinder blocks, bricks and other things in lieu of a stand like I have. Whatever works. I had the wood, the paint and the time so I built one. I bought some concrete piers to set it on to get the wood off the ground and to raise it up a few more inches. Again, whatever works. The bees won't care at all.

The first piece of the hive is a "landing board" which provides a place, as the name suggests, for the bees to land when returning to the hive. I built mine but you could purchase one from a number of sources too. Landing boards aren't absolutely necessary and I would guess that most hives don't have them, but I liked the idea and had the wood, so I made a pair of them for my hives. The landing board is the slanted piece here directly on the hive stand at the bottom of this picture.

Atop the landing board is the "bottom board" and this one is a screened bottom board, sometimes called an "IPM" or "Integrated Pest Management" board, but I call it a screened bottom board personally. It has a place to slide in a white plastic board for doing mite counts or for covering the screen if you want to make the hive less drafty (e.g., during the blustery wintertime). They also make solid bottom boards which are, as you might guess, solid on the bottom rather than screened. Don't buy these. The screened bottom board is far superior for a number of reasons, not the least of which is ventilation. The "screen" is actually ⅛" hardware cloth that is tacked in place and is both more durable than actual screen and also of a size that allows pests like the Varoa mite to fall through and onto the ground. Varoa mites literally suck the life out of your honeybees. You'll probably have them in your hive - most hives have them - but an infestation of them can kill the hive . We'll talk more in the future about things you can do to combat Varoa.

If you look closely at the picture, about two inches back from the front of the bottom board is a small board that sits across the front of the hive. This is an "entrance reducer" and it gives the bees a little help defending the hive. We've got it positioned with the smaller hole  in use while if I flipped it around we could use the larger entrance hole. As the hive gets stronger, the larger hole is preferable to the smaller one since it allows less queuing up of bees going in and out of the hive. The entrance reducer could be removed completely too for a strong hive.

My son is about to place a medium hive body onto the bottom board. It is called a medium based on its height. The length and width of the box is pretty standard but there are a couple of common heights (medium and deep) and a few less common ones. It is called a hive body because it will hold frames where the queen will lay her eggs and where the hive will raise its young. Typically the frames will have some honey and pollen on them but will be mostly filled with brood in some stage of development. You can see in this picture that the frames in the center are covered with bees while the outer ones are not. The outer ones are new frames that were added to the nucleus hive's five frames to make up the ten frames held in this medium box. Boxes are sized to hold either 8 or 10 frames. The narrower 8-frame boxes are lighter and may be a good choice for those not wishing to pick up so much weight - and the boxes do get heavy. Something to keep in mind.

Next up, to the left are the pieces which will be added, in order, to the hive. There is another medium filled with new frames, which they will use for brood. We put this on right away though we could have waited a week or so for them to draw out comb on the new frames in the bottom box. I may need to make some frame adjustments during my next hive inspection to encourage them to draw out come on the outer frames. Bees tend to move upward. Life was going to be busy for a couple of weeks after this hive install so I opted to put the second box on right away. We will see how things look when we open up the hive for our next inspection.

Then, under the medium is an empty deep. I used this out of convenience as a "shim" piece to make space for the baggy feeders. It is really overkill for a baggy feeder (since the baggies aren't that tall) but it was handy. Later on, it was pulled out and replaced with a medium so I could put it to use in hive #1, which uses deeps rather than mediums for the brood boxes. I'm currently using baggy feeders in one of the hives (baggy feeders are just zip-top bags filled with a 1:1 sugar syrup that have a slit in the side where the bees can access the syrup) and trying an inverted mason jar with some small holes punched in the lid on the other. I'll probably move away from the baggies as they are a bit messy and are a "one time use" feeder.

Below the deep is the "inner cover", which has a large hole in the center of it (not visible in the picture) and a notched opening. Inner covers are used for a number of reasons, but in this hive it is place atop that shim piece and provides an exit point at the top of the hive. I added a second hole in the inner cover and covered the hole with screen to improve ventilation. Ventilation is really important in the hive as it helps the bees regulate the temperature and humidity properly.

The "telescoping outer cover" is next and it's job is to top off the hive and keep the weather out. It is "telescoping" because it is a bit bigger than the inner cover and boxes so it can slide forward a bit and expose that opening in the inner cover. It is covered with metal (which I've painted to hopefully keep it a little cooler) and as you can see on the upper left part of the picture, I use a  brick on top of it to help keep it in place. If it is really hot (such as it gets here in Virginia in August) I might prop open the top of the hive during the day to help with the heat. More on that in a future post.

That's probably enough for this image.

Matt (twitter @MattInTheGarden) thinks, clicks and types for a living. He has an unending backlog of farm chores. He recycles everything he can and has three full compost bins made from free pallets whose contents are in various stages of decomposition. Matt likes strawberry jam and the puzzles of Professor Dennis Shasha.