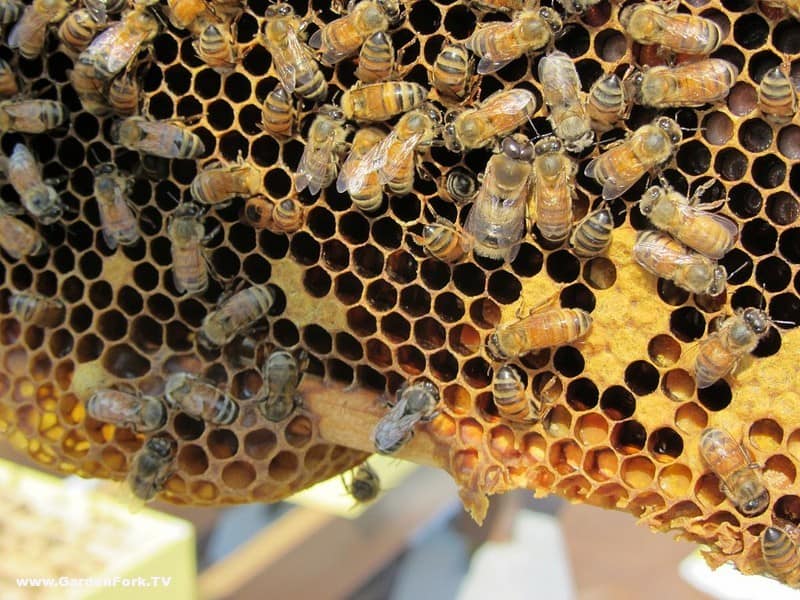 One of these things is not like the other....

Take a look at this close up of a frame and you'll see around 40 adult bees, busily attending to their duties - cleaning out cells, feeding brood and capping cells. Most bees in a healthy hive are female workers. But in this image one of the adult bees is different than the others - the big one near the center of the picture. It  is a drone. A male honeybee whose sole purpose in life is to mate with a queen. The drones in a hive don't do much of anything else other than mooch food from the working females.

Ladies, go ahead and insert your quip here about how this isn't much different than it is in the human population. I'll wait.

So, beyond the obvious size difference, you'll also notice that this drone has large eyes too. I suspect that this aids drones in searching for queens. Something that isn't obvious in this picture is that drones cannot sting you. They have no stinger.

In addition to the drone in this picture, you can see some larva in some cells, particularly on the right side of the image. These are fed by the workers until they are capped for the transition from larva to pupa. I think it is interesting that bees (and other insects) are essentially shut off from the world during this transition and I wonder about that sometimes. What exactly is the purpose in doing so? I think this is a question for my online insect friend, Debbie Hadley. I'll talk to her about it and report back in the future on this.

Finally, you'll notice the glob of comb at the bottom of the frame. This is called "burr comb" and can show up just about anywhere in the hive. I guess any comb that isn't where you want it to be can be called burr comb. The bees, however, treat it like any other comb and might put nectar, pollen or brood in it. In general  this burr comb is the result of excess space in the hive. Bees fill in the excess space with comb. You'll also notice that much of the comb on this frame is darker in color and this is because the comb is probably at least a couple of years old. This frame came from my mentor's nucleus hive so it has some age on it compared to the brand new frames and freshly drawn comb elsewhere in my hives.

Matt (twitter @MattInTheGarden) likes raised bed gardens and collecting rain water for watering his plants. If he's going to eat fast food, he prefers Chipotle and Subway over burgers. He modified the computer bowling game in high school so that he could always bowl a 300 game. The teacher was not amused. He is allergic to rabbits and politicians.