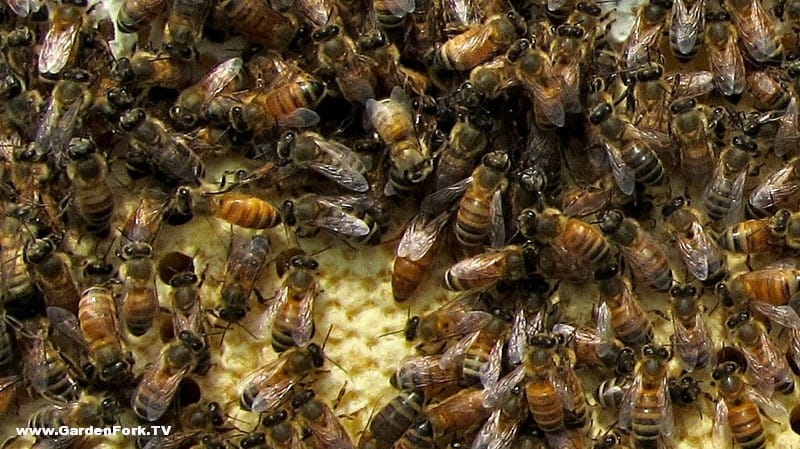 Field Marshal of Obvious here. There are a lot of honeybees in a hive. I would say "more than you can shake a stick at" but then two things would happen:

I'm mostly concerned here, of course, with number one. The Teacher can be brutal with her critiques.

Seriously, I think that it can be a bit overwhelming the first time one pulls a frame out of a hive body and sees all those bees crawling around on the comb. Personally I felt mixed emotions when I first put my J-hook hive tool under the end of a frame, raised it up with my thumb and index finger and then repeated the process on the other end of the frame so I could get a good grip on it. The bees are everywhere and are seemingly putting themselves right where my fingers need to be. I was a bit cautious, frankly a bit intimidated, and certainly exhilarated. And for the most part, the bees didn't seem to mind all that much that I was getting up close and personal with their world. I had some buzzing about, whining their high-pitched "annoyed" whine and some were bouncing into me - "head butting" as some folks call it. But most were busy as... well, bees.

This image is a closeup of a brood frame in my hive #2, the one from my mentor's nucleus, or "nuc" hive. Over in hive #1, the bees originated from a package I purchased from Georgia and had a "marked" queen. Marking the queen, I believe, serves two purposes. First, the color often is used to identify how old the queen is, or at least I've been told that. Mine has a blue dot upon her back. That makes it relatively easy to spot her - likely the primary purpose for marking the queen. The blue is bright and stands out against the blacks, yellows, siennas and umbers of the hive. There just don't tend to be blue things in a hive, so the dot stands out like a sore thumb. But that is over in hive #1.

In hive #2 there isn't a marked queen and so it is a bit of a "Where's Waldo?" game to find the queen. Honestly, I didn't spot her while doing my inspection, though there was ample evidence of her existence - plenty of capped brood, larva, I assume eggs (my eyes aren't what they used to be and I didn't have my reading glasses handy, so I couldn't be sure) and activity. The hive was humming along and everything seemed, well, orderly so my assumption was that she was alive and well.

But it is nice to find the queen.

Take a look closely and there in center is the queen. You can see everything other than her head, which is hidden by the wing of one of the workers. A few points of interest are:

One other interesting factoid is that the queen has a stinger but generally doesn't sting. She can, however, repeatedly sting because unlike the workers, whose stingers are barbed, her stinger isn't barbed.

Matt (twitter @MattInTheGarden) can do a pretty mediocre Bobby McFerrin chest thumping "Don't Worry, Be  Happy" impression which he occasionally uses to aggravate his daughter at bedtime. He once saw Mike+The Mechanics and The Outfield in concert at Kings Dominion. One of his favorite musical chords is the Neapolitan Sixth. His favorite in-person drum corps performance is Rocky Point Holliday by the 1983 Garfield Cadets. Amazing stuff.