I got a wasp identification email from a friend this weekend.

"Not sure if these are bees or hornets. Any thoughts? We have two nests." 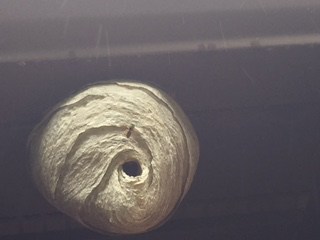 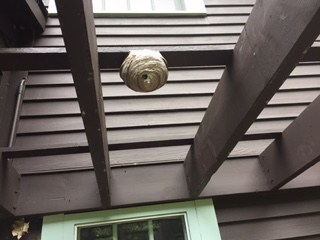 I get a lot of these 'are these honeybees?' photos. I am always surprised when I do get this question, because I think most everyone knows basic insect identification. But maybe I might have the same lack of knowledge when it comes to cat breed identification. They are pretty much all the same to me.

Kelly of the Root Simple website wrote about wasps recently, and that's what prompted me to action this time. Without getting into the weeds of insect names, these are not honeybees. They are wasps. The common name is paper wasp or umbrella wasps, and if the nest is in an out of the way place, leave them be.

Wasps are pollinators and eat problem insects in your garden. Some of them also eat apples, especially fallen apples that have been split open or mashed by the lawnmower. This is a bit of a problem in our  yard when we have a large apple crop. As one of our Labradors, Charlie Pup, likes to eat fallen apples as well.

Wasps, also known as hornets, generally are only aggressive if you mess with their hive. Yellow Jackets, while part of the wasp family, can be quite nasty. Quick Tip: Yellow Jackets nest in the ground or rock walls, you usually find them when mowing the lawn and you run over a nest.

The nest in the photos above will have to be removed, as it is right next to the door of the house.

Paper wasp nest start out as a paper comb of cells that looks like an umbrella, when it is small, it is tended to soley by the mated queen. As the nest grows, the  hatched young take over many of the jobs of running the nest. The wasps will then start to cover the nest with a papery covering. If you've seen one of those giant wasps nests, its probably a bald faced hornet nest. 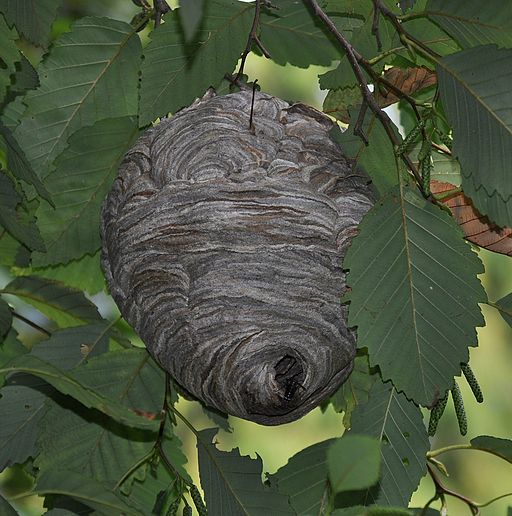 Wasps do not re-use the same nest every year, so if you find one intact after a hard frost, you can take it down and save it. They are amazing, I think.

If you need to neutralize a wasp nest, I suggested buying the foaming wasp spray that can shoot 10 feet or more. Get as close as you can while having a clear exit path, and spray the nest at dusk or at night. If you spray the nest during the day, you will not kill all the wasps, and wasps will return later in the day and buzz around the dead nest.

Unless they are right near the door of the house, I leave wasps nests alone. We get them under the gutters of the house, but they don't bother us, and I know they are eating up insects in the garden.