One of our dogs had a canine stroke, here's how we found out and the recovery. 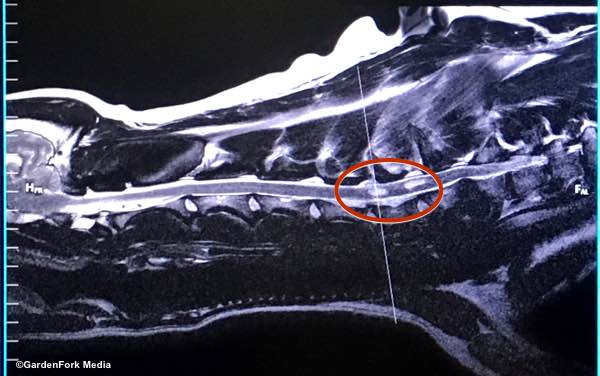 A few weeks back we noticed Charlie Pup slipping when she ran around corners on our wood floors. This progressed into a general wobbly back end, losing control of her back legs. We thought it might be hip dysplasia, so we went to see Charlie Pup’s doctor. Canine stroke was not even in my list of possibilities.

Hear me talk more about Charlie's stroke on this episode of the GardenFork Radio Podcast.

Charlie Pup's doctor watched her and immediately said that this condition was not hip related, but neurological. She suggested and we agreed to take her to the see a neurosurgeon at the Animal Medical Center in Manhattan. Our vet helped us make the arrangements and did an x-ray and blood tests to rule out a few causes.

We’ve been to AMC in NYC before, with our other Labrador, Henry about 10 years ago. Its kinda like the Mayo Clinic for dogs.

So we drive from Brooklyn to Manhattan, park the car in the hospital parking lot, and take the elevator to the waiting room. The doors open, and I see a rooster, an iguana, a parrot, and a bunch of NY people and their dogs and cats.

Kinda like a live version of a New Yorker Magazine cartoon.

We get to see Dr. Abby Lebowitz, a neurologist and neurosurgeon. Super nice doctor who also has a Labrador. Dr. Lebowitz and her team take Charlie and want to do some motor function tests. So we get to wait in the waiting room with the cast of characters.

We met Dr. Lebowitz after the testing and learn there can be several causes for Charlie losing control of her back legs. We are given the option of having an MRI right away, or we can have Charlie on confined rest for 3 weeks and see if she improves.

We opt for confined rest, as an MRI is not cheap. Having been through several back-spine treatments myself, I know the body can heal itself for some back issues.

We kept Charlie Pup and Henry up near the front bay window in Brooklyn so they would have sunlight and see outside most of the day. Charlie Pup is bonded to our older Lab, Henry, so we have to keep them together. Our neighbors lent us two sets of folding dog fences that worked great to keep them in their small area. 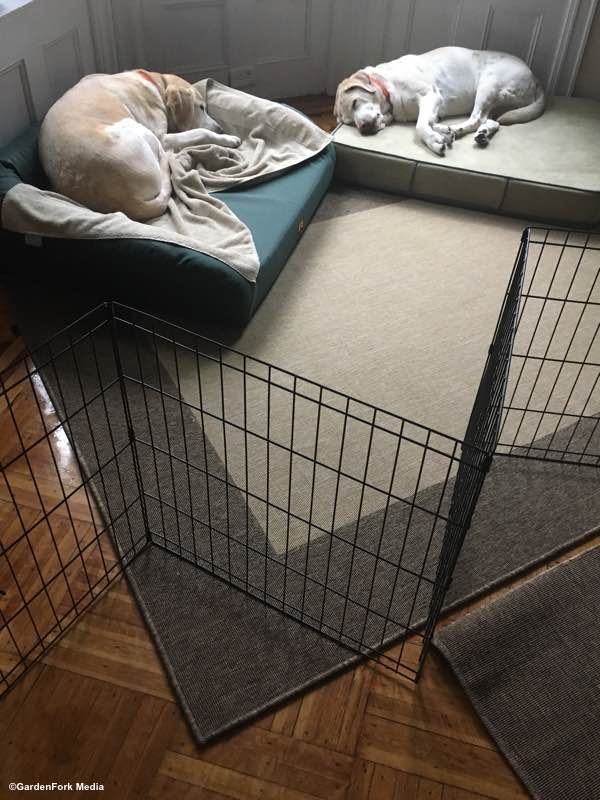 Here is the bolster orthopedic dog bed we use for Charlie Pup, the dog fence, and Henry's flat orthopedic bed.

I was surprised the Labradors did not just push the fence down. But it worked very well.

We are lucky to have a small backyard in Brooklyn, so the pups went outside 4-6 times a day. We would walk Charlie Pup in the yard on a leash. She likes to bolt out the door to chase squirrels. She was not allowed on stairs either.

After 3 weeks of confinement, we realized her wobbly legs were not improving. We talked with Dr. Lebowitz and scheduled the MRI.

Charlie Pup spent the whole day in the offices of the neurology department. We are told she was very popular. They did an MRI, X-rays, and a sonogram.

At the end of the day we met with Dr. Lebowitz and we learned that Charlie Pup had had a canine stroke, and it is causing her to lose control of her back legs.

This is a relief in a few ways, its not a ruptured disc that would require surgery, or spinal stenosis, which would mean steroids.

Charlie Pup is to take it easy and slowly progress back to her normal activities. We might try some physical therapy; aqua therapy sounds appealing as she loves to swim.

She will always be a bit wobbly in her back legs, but its good to know what happened and how to proceed.

Listen to me talk about what can happen if your dog has wobbly legs on GardenFork Radio.