Not many things match a beehive swarm in terms of amazing nature. One of my beehives swarmed and I was lucky enough to be on the roof while it was happening. Watch the video:

This beehive swarm is from a new package we installed this spring, which is unusual.

I made two huge mistakes while the hive was swarming.

First, I saw the queen on crawling on the roof. And I went to pick her up, but I wanted to take a picture first. I got the picture, but then the queen flew off. Had I gotten the queen into a queen cage, I could guide the swarm into a new hive. But no, I wanted to use my camera. Not Smart. I'm still annoyed at myself for that. 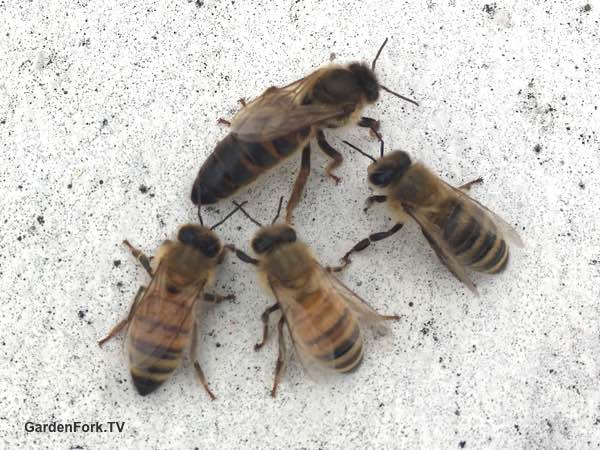 I should have capture the queen. I didn't.

The other dumb thing I did was to not realize that the swarm was alighting, or forming, on the front of the hive, instead of a tree branch. The hives are on top of a 4 story building, above the tree line. No tree limbs above the hive for the swarm to collect on, so they just formed on the front lip of the outer cover. I was so wrapped up in what to do, and recording the spectacle on with the camera, that I completely blanked on what was right in front of me.

This only occurred to me after I called my GF Radio Podcast host Rick, and then I bolted down the ladder and 4 flights of stairs to get a bait hive. By the time I got back up, the swarm had left the hive.

I had two unique chances to grab the swarm and I blew it. Insert choice words here.

Its unusual for a new hive, started from a package, to swarm. My radar was not attuned to this hive swarming. I had just put a third brood super on the hive, and had not opened the hive to check for swarm signs. I have never had a package swarm before. Now I have. Lesson learned.

Going forward, I will be more vigilant about swarm signs, even in packages. Rusty at Honey Bee Suite has a Taranov Split that I will try next time.

Watch us hive a swarm in this great video:

This same hive gave me another headache earlier this month, see it here. Minor Beekeeping Meltdown