We talk about Fruit Walls, which we read about on the site Low Tech Magazine. Fruit Walls are tall thick walls made to absorb the heat of the sun and create a micro climate to grow warm weather fruits in France, Belgium and Europe.

This is where the espalier concept of pruning - training of a fruit tree came from, we think. The tree was trained to have lateral branches that would spread along the fruit wall and benefit from the heat being put off by the wall. Previous to reading this article we were clueless about this.

The fruit walls advanced with the addition of chimneys built into the walls, with fires burning in a part of the wall and the hot exhaust heating the walls. 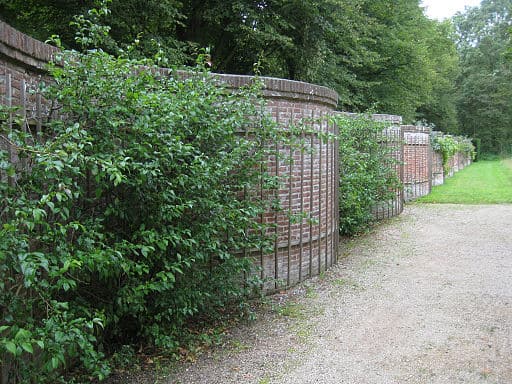 A neat version was a fruit wall with the addition of what was basically a window frame to become a greenhouse. As greenhouses became popular, the fruit wall became part of it, absorbing the heat of the day and keeping the greenhouse warm at night. This concept is still used in China today.

In late 19th century greenhouses as we know them today became popular, and fruit walls fell from favor.

We talk about the DIY mini greenhouses we have built, watch our greenhouse vids here.

Then the show starts going on a tangent into concrete, and how the Romans made really good concrete, which is called cement, depending on who you talk to and how its used.

There is a lot of this solar heating and hot beds examples at Colonial Williamsburg, Rick says. We'll have to look into making a hot bed with horse manure.