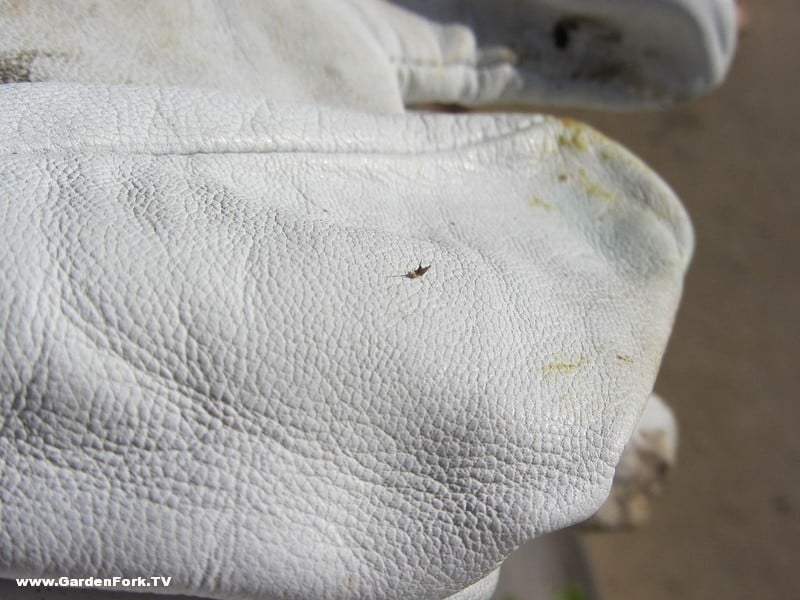 It was a Father's Day hive inspection. Dad (that's me) and son checking out our two hives. Beautiful day. 78 degrees Fahrenheit and just a light breeze. Quite a few things to say and show about this inspection so expect more posts from me in the coming days.

There are a LOT of bees in these hives. I think non-beekeepers (as well as this first year beekeeper) just don't get how many bees can live in a hive. It's incredible quite honestly when you pop open the hive and there is just frame after frame of bees - often so many of them that you can hardly see the comb underneath. The frames with brood on them are just teeming with bees.

I've written before about pheromones and how the hive uses these to communicate. One pheromone they use quite effectively is the alarm pheromone. I understand folks say it smells like bananas. I've got a particularly poor sense of smell and am not sure I personally could smell it. At least I haven't noticed it yet.

Here is a closeup of my glove. Yes, there's some goo on it - white shows every stain - but right in the center of the shot is the topic of this post.

Today we were on the business end of the stinger. Not the place you want to be, quite frankly.

My son was taking the lead on the inspection and the bees weren't all that happy that we were bothering them today. We used the smoker a couple of times and it helped a bit but they were head  butting us from the beginning. They were crawling all over my son's gloves and that, pardon the pun, bugged him out a  bit. I think he was worried about squashing them as he lifted up frames.

He got stung on the index finger through his glove while trying to take out the sixth frame and let the frame drop, maybe only an inch, back into the hive body. That didn't, as you might guess, improve the hive's disposition. The stinger stuck in the glove and a bit of the venom went into his finger. He wasn't happy. They weren't happy. We stepped away, I took the hive tool in my hand and scraped the stinger off the glove. That step is important. The sooner the stinger is removed, the less venom ends up in the body and the less it will hurt. Scrape it, don't grab and squeeze.

I sent him in to put some ice on it.

I decided then that it was time to button things up and try again another day. Their mood wasn't going to improve.

That's the issue though with beekeeping. Unlike woodcarving or painting or playing the french horn, if  you need or want to stop, you can't just walk away from the hive. If you've opened it up, you've got to close it back up. Even if the conditions stink. Even if they aren't happy. Even if you've been stung. Some beekeeping friends of mine (Eric and Rick, to name two) have been stung way more than this and surely wanted to just walk away for the day. But you have to finish what you started because that hive won't put itself back together.

There were a dozen or so bees banging into me and buzzing that distinctive "I'm pissed at you" buzz. It took me about five minutes to get everything back together because A) the smoker had gone out and B) I needed to step away a few times because they were getting a bit overwhelming, quite honestly. Crawling over my hands, walking all over my veil, flying about, bouncing into me.

Then they stung me in the hand. Just two or three times. I only felt one of them, looked down and instinctively wiped my one glove with the other. I scraped one more off that I saw before the camera guy in me said "you dummy, take a picture" and then I looked over the glove and found another. That's the one you see here. This one, however, didn't penetrate the skin.

Fortunately my gloves are thick and it just felt like a pin prick as no venom reached my skin. I took a walk away from the hive for a minute or two to see if things calmed down. It did - at least enough to finish closing up the hive. And I got that picture, which was cool. We took one of my son's finger post-sting but it didn't turn out well and he wasn't all that keen to have dad keep messing with it so I gave up on that shot.

For the keeper, the poke of the stinger and the pain of the venom is a temporary thing. My son's already over the sting and off to camp to enjoy a week of fun. For the bee, well... it means death... at least for the workers. The barbed stinger of the worker ends up sticking into the skin (or the glove in our case) and causes the back end of the bee to open up. The bee soon dies. Unlike the worker, the queen has no barb on her stinger so she could, in theory, sting you multiple times. In practice the queen isn't likely to sting you. The male drones have no stinger, so one can pick those up barehanded without incident. The workers... yeah, they sting. A little smoke applied to the sting area helps to mask that alarm pheromone.

Box checked. First stings have happened. There will be more. No worries.

I plan to get back into the hive again later this week to finish what I started. I talked with my son and he was OK and said he'd definitely be back in his beesuit again. I'm glad for that.

Matt (twitter @MattInTheGarden) once went to timber framing school with his brother. He prefers homemade jam to store-bought. He loves the puzzles of Martin Gardner. He wonders why all milk products aren't packaged in the same plastic as milk jugs.