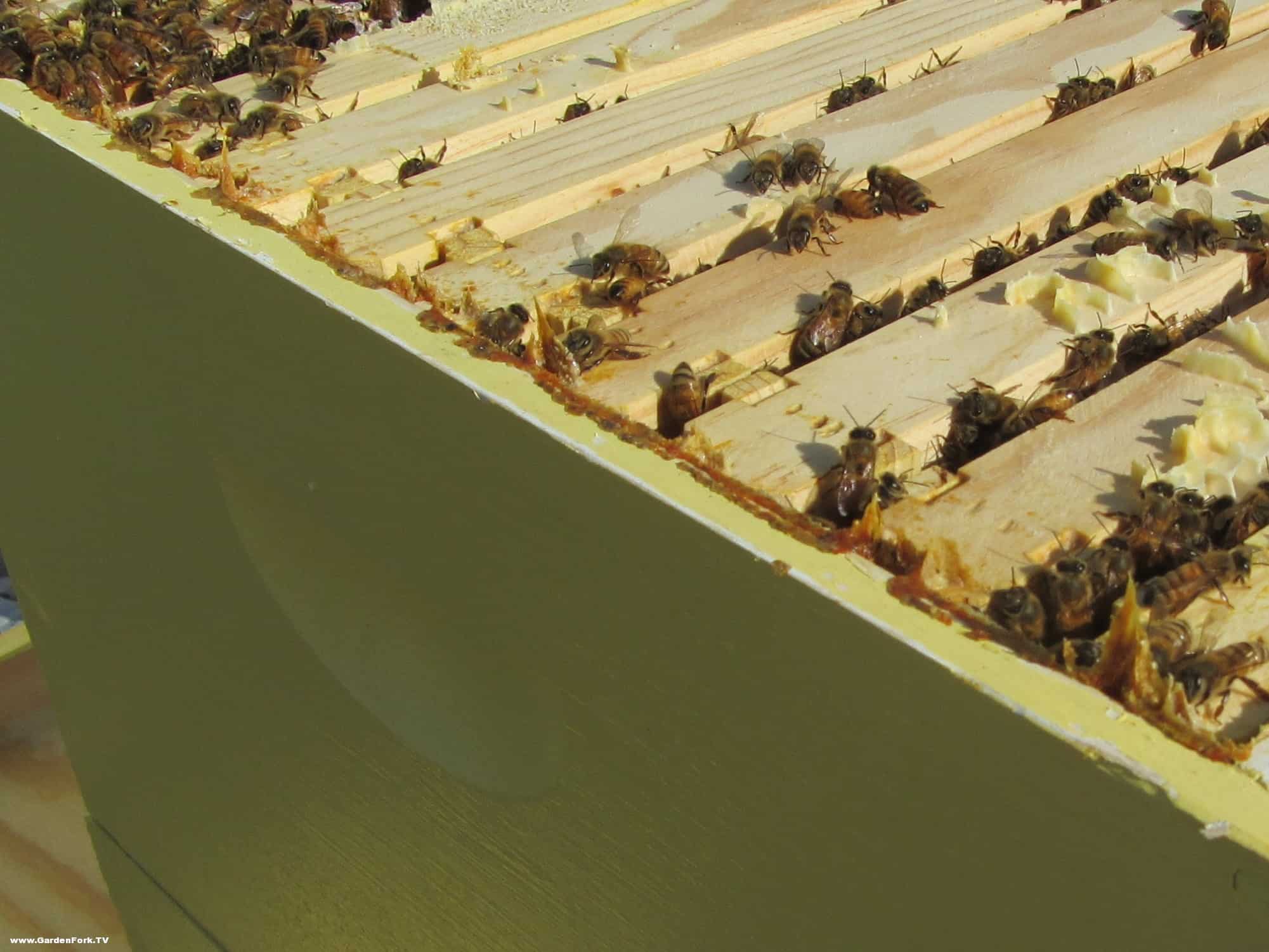 When folks talk about beehives - average, non-beekeeping folks, that is - they'll probably mention honey, honey comb, the queen bee, maybe pollen. Those are things most folks would know. Today I want to talk about something that few folk outside the beekeeper community would know about - propolis.

In this image you can see what look like dirty peanut butter along the edge of the hive body. This is a resinous substance known as propolis. It is produced by the bees from the plant resins and sap. It is a sticky, gooey mess when it is warm and I am told it is hard and brittle when cold. The color will vary a bit based on what plants the bees use to produce the propolis.

Bees use propolis in the hive to do a few things:  fill in small cracks, seal up anything they think needs to be sealed, coat anything they cannot remove from the hive (such as a dead mouse). Personally I've not seen bees do the latter (yet) but I've certainly seen them seal up gaps.

Hives bodies (the boxes holding frames of comb) are challenging enough to handle when they are full - they get heavy quickly. Propolis adds to the challenge by sticking them together, making it harder to separate hive bodies so you can lift them. I had to really work hard to get the hive body above this one in the picture off and found my hive tool worked pretty well to gain some leverage and pop it apart.

Propolis, I'm told, is quite effective at hermetically sealing nasty stuff in the hive (such as that dead mouse) so that it doesn't foul up the hive. It apparently has some antimicrobial and anti-fungal qualities depending upon what plants resins are used. I've witnessed that honeybees are pretty clean creatures and act in a very methodical way to maintain order. If I ever have an opportunity to capture them coating something (other than the cracks of the hive) with propolis, I'll be sure to snap a picture.

There are folks who use propolis for medicinal reasons. I'm told you can find it in heath food stores and that claims are made as to its efficacy in the treatment or prevention of this or that. I don't have any personal experience here so I can't really say. I'd probably want to see some scientific evidence of this before plunking down any cash on this. I'm not sure that there is even any requirement to prove its efficacy before selling it. And if there's (potentially considerable) variability in its makeup, it might be difficult to know if that propolis you're buying is going to do you any good. Again, I've got no experience here but I'd be reluctant to shell out too many of my greenbacks on a substance that might not be regulated and may not provide any real benefit. I simply don't know enough about this to definitively come down on one side or the other. Caveat emptor.

Beekeepers wanting to collect propolis (and potentially make some cash by selling it) can put a screen in the hive - these are available from the various beekeeping supply companies - and the bees will coat the holes with propolis. Personally, I'd rather that they make honey but who knows... I might try this in the future.

Matt (twitter @MattInTheGarden) enjoys making his own carbonated drinks with his Soda Stream. He is not a fan of horse flies but prefers them to deer flies since he can hear them flying around. He is tired of replacing rotted wood in his raised bed gardens and wants to move to brick ones. First, he'll need to get some mad mason skillz(TM) to accomplish that task.