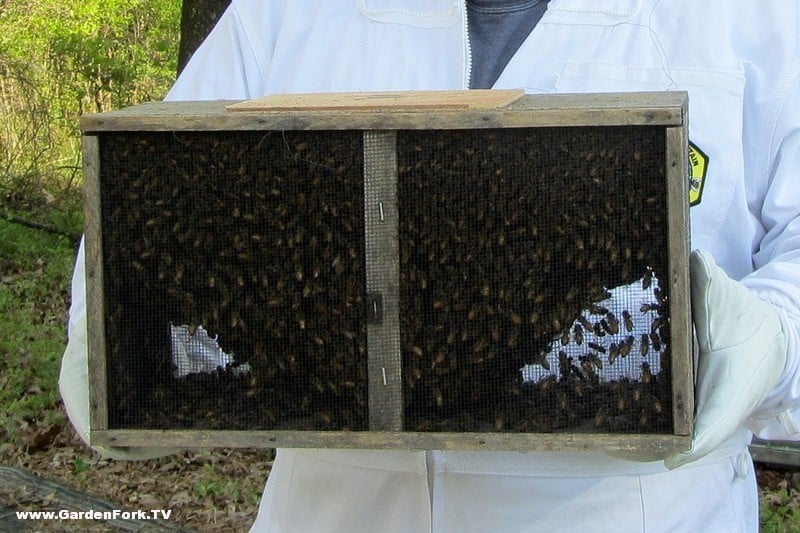 How do I start a hive? Good question. I asked this myself and of Eric when we talked on GardenFork Radio and via email. Well, you're going to need some bees and that is the topic of this particular photo. What I am holding here is called a "bee package" and weighs a bit more than 3 pounds. It is a simple wooden box that has screen tacked onto two sides to provide ventilation to the bees within. On the east coast folks down in Georgia literally shake a few pounds of bees down into a cone that is jammed into the top of this box. If you've seen videos of this process, you'll notice that there are bees everywhere. I can imagine the bees don't like it all that much, but that's how it goes in the bee package business. There are thousands of bees in this box and one thing that you'll notice when picking up the box is that it is warm. Bees generate a fair amount of heat and I could feel their warmth through the thin wood of the package.

They tend to cluster around a queen cage that is hanging down from the top of the box and around a can of sugar syrup that is inverted and rests upon a ledge in the center of the can. You can't see either of those things in this particular image, but you can see the thin square of wood that is tacked to the top of the package and covers the hole where the syrup can and queen cage are. The majority of the bees stay toward the top of the box though some will move around along the bottom. One point I want to make is that there will be dead bees in the package. I had approximately ½"-¾" of dead bees in the box after the live ones had vacated it and move into their hive. This is an expected situation, though if you've got an inch or more of dead bees you might want to raise some questions about how they were handled, etc. As a recycling guy, I knocked all the dead bees out of the box and into my compost bin, figuring that it was as good a place as any for them, but that's a story for another day.

At package pickup I wore my beekeeper suit, veil and gloves but it wasn't really required (though we did have one package break open and there were bees flying about) and my son and I did it mostly because we wanted to break in our suits. The bees can't sting you through the wood (obviously) and so handling the package with bare hands and no bee suit is fine for transport.

I left my package in the garage for a couple of days until conditions were better for installing them into the hive. As long as the bees are not subjected to the hot sun and have food and water (which they do from the syrup can), they'll be fine if you must delay a day or so. I had my son spray a little 1:1 sugar water on them - just a spritz - twice a day while they were in the garage. I don't know that they would have done any worse if he hadn't sprayed them, but I'm sure they were happy with the sugar water and it made us feel like we were tending to their needs while we waited for the adverse weather to pass.

Matt (twitter @MattInTheGarden) makes his living worrying about software efficiency, asynchronous program execution and end-user needs. When he's not driving the desk, he can be found listening to podcasts like GardenFork Radio while he tends to his hobby farm in Virginia. Matt quite dislikes pickled beets and liver. His miniature Sicilian donkey is unimpressed by Matt's musical tastes and mostly just wants him to feed her carrots and apples.