When sparks fly out of it, its time to replace a GFCI outlet. My neighbor had his house power washed, and not sure how, but the power wash wand managed to blast up in to the GFCI outlet. Bad, very bad. 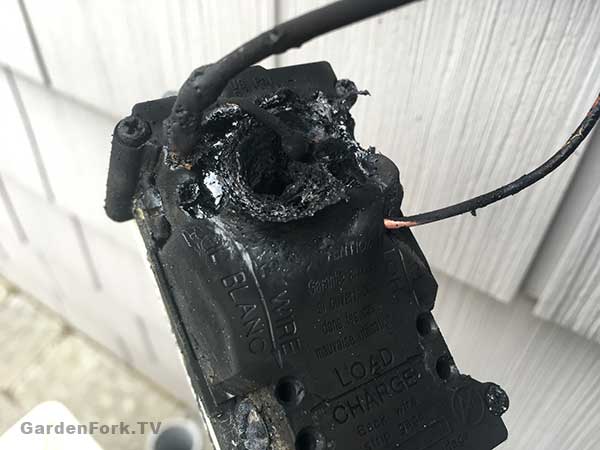 I'm sure the power washer operator knew something was wrong when the sparks and smoked started coming out of the outdoor electrical outlet. The one with the weather proof cover on it. Yeah, that one...

My neighbor asked if I knew how to replace a GFCI outlet, so it was time for some DIY electrical repair. Big Note: if you don't know your way around electricity, enjoy this story but don't try this yourself, ok?

I guess the power washer guy got the washer wand too close to the outlet, and maybe directed the spray at an upward angle. Water got up under the outlet cover, and into the GFCI outlet. Then the sparks fly. 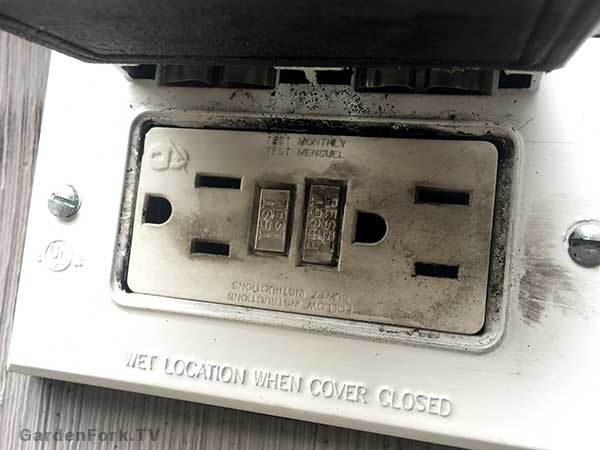 What is a GFCI outlet?

A Ground Fault Circuit Interrupter outlet is used in wet locations. Areas where there is a possibility that despite all your best intentions, you are standing in a puddle of water when plugging something into an outlet, and you managed to grab prongs of the plug when plugging into the outlet.

"These electrical wiring devices are designed to quickly and automatically disconnect a circuit when it detects that the electric current is not balanced between the energized (line) conductor(s) and the return (neutral) conductor. Under normal circumstances, these two wires are expected to carry matching currents, and any difference can indicate a short circuit or other electrical anomaly is present, such as leakage. Leakage can indicate a shock hazard (or shock in progress) which is a potential danger to a person. Current leakage can result in harm or death due to electric shock, especially if the leaking electric current passes through the torso of a human." Wikipedia

Love the last part, passes through the torso of a human. Yes, that is a bad thing.

My neighbor picked up a new GFCI outlet and we turned off the power to the outlet at the breaker panel. I then removed the screws holding the outlet in its box, pulled out the blown outlet and tested the wires to make sure that they were not energized. IOW, Making sure I wouldn't get shocked. 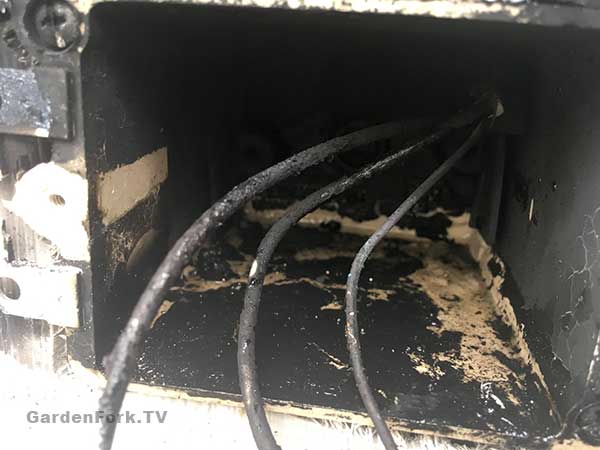 Look in the back, there's still water in this box. 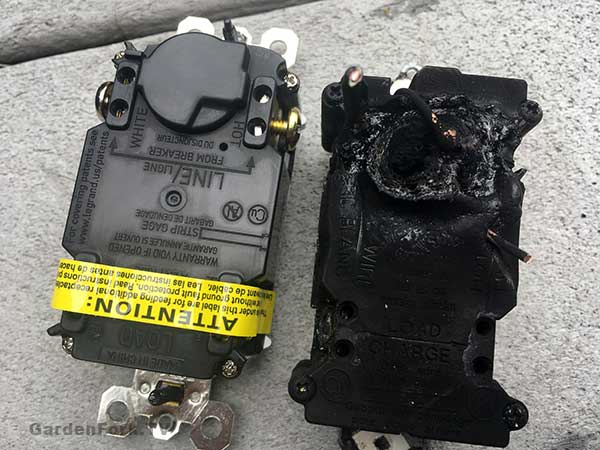 I have a favorite tool for keeping electricity form passing through my torso: it's called a non-contact circuit tester. You can tell if a wire is energized (it has power in it) by just getting the tip of the tool next to the wire. Neat. It chirps and blinks if there is power present. Whenever I open an electrical box, I first check all the wires with this tool. Saves my torso... 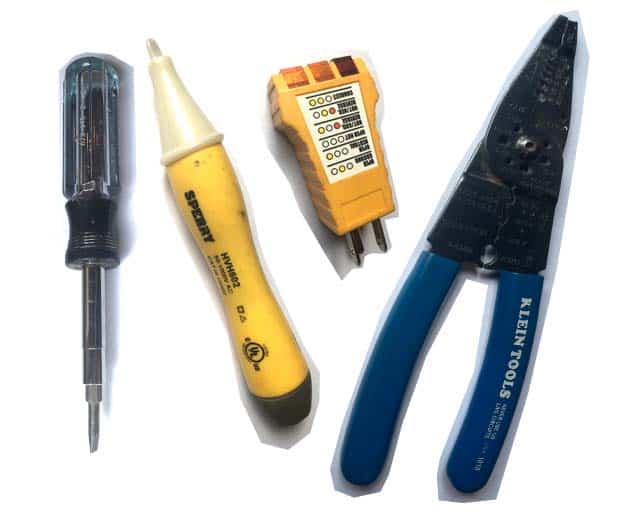 How to replace a GFCI outlet

First, when you want to replace a GFCI outlet, buy high quality replacement. The cheap ones will always break. You get what you pay for with most things, and we don't want to cheap out on anything that involves electricity. Learn from me, OK?

I managed to pull out some wire from inside the wall and cut back the fire damaged wire. I connected the black, white, and green wires to the correct screws. The 2 correct screws for the wires bringing power to the outlet are labeled LINE, and should be across from each other. Most outlets are well marked where the Neutral and Hot wires go. Neutral or Common wires are white. Hot wires are black, but can be red if the outlet is connected to a switch.

If power is flowing from this GFCI outlet to other outlets (which will also be protected by the GFCI) those outlets will be connected to the LOAD screws. The load screws are usually covered with tape like in the photo below. 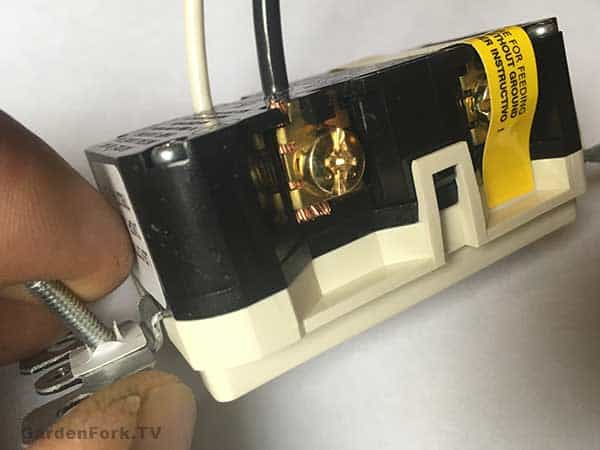 Insert wires into holes in back of outlet, screw tightly down. 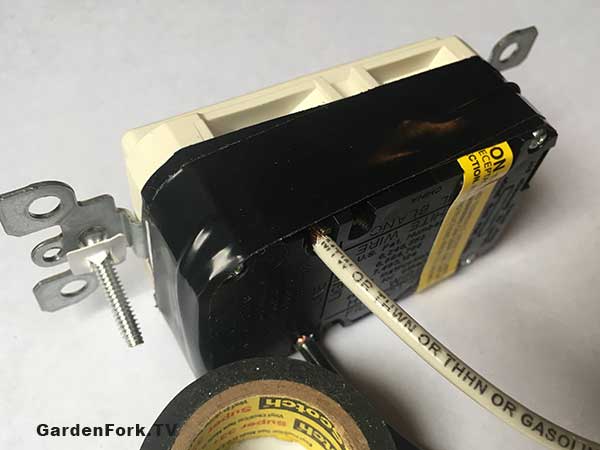 Wrap back of outlet tightly with electrical tape 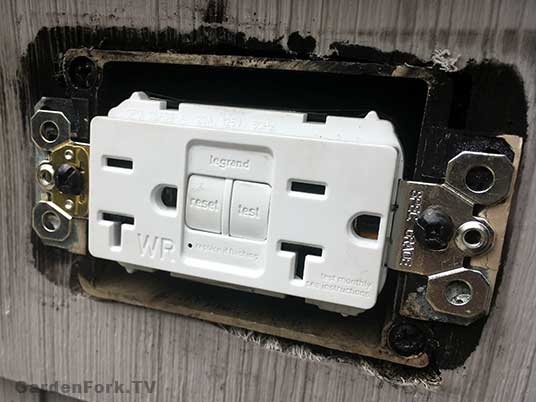 I pushed the new outlet into place. Note: my neighbor bought a 20 amp outlet, one usually installs a 15 amp outlet.

Put your outlet tester into the outlet and turn on the power. You should be good to go. 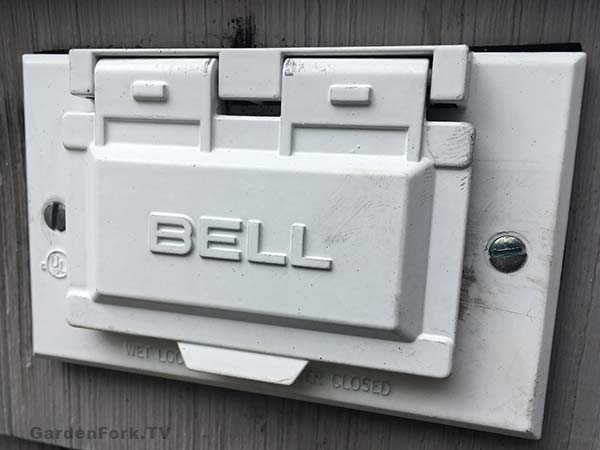 Weather proof covers are a must for outdoor outlets. Replace the rubber gasket it if it damaged