Tony wanted to make a brick pizza oven, and he found our pizza oven videos, and then made his own version. On a rooftop in Cambodia, of all places. How cool is that?

"I’ve been meaning to re-visit your site since it provided the perfect solution I was looking for in 2013 when I wanted to build a pizza oven on my roof here in Cambodia.

I stacked and built mine on a custom made angle iron table with the angle iron bars ($40). Then I found these perfect 2 inch think angled cement pieces to put under the oven ($10). Once I found the place to buy the old bricks from the French Colonial buildings being dismantled at a price of $1 for 4, things got a lot easier – but finding the bricks was not an easy task given the language barrier and neither did the fact that it’s a 5 story building with no elevator. Although I did get a great workout bring it up and continue to do so with each or cord of wood. One original modification on made on your design was not to stack the bricks vertically but instead all of them flat.

I have now re-built the oven three times, replacing cracked bricks and modifying the design slightly. I originally had a chimney in the back but found it was really non-essential. One nice feature I added was an elevated level in the front for cooking the pizza on. I also built it up two brick levels higher over all as the brick price is pretty inconsequential here. I use terra cotta tiles to cook on in the oven and on top of the oven to keep the pizzas warm, help the dough rise and get the crust a bit crispier.

Thanks for the inspiring solution. If you are ever in Phnom Penh, Cambodia come over for a pizza with one of the best views in town."

Not only are they good for making pizza, but our DIY Pizza Oven Plans make for a good workout when you are hauling brick up four flights of stairs!

Interesting that T0ny also found that one does not need a chimney for this pizza oven. I have had many people ask about that. 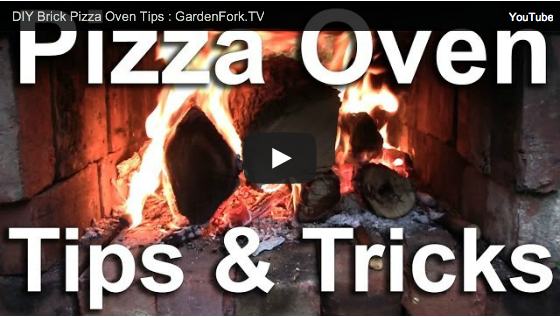